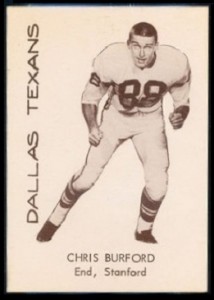 One of the rarest of regional football card sets of the 1960s is the 7-Eleven Dallas Texans set from the AFL’s inaugural season of 1960.  This set features 11 unnumbered, standard-sized cards (2.5″ x 3.5″).  The cards, which were distributed in Dallas-area 7-Eleven stores, feature sepia photos, with basic player information on the card fronts, and biographical information on the backs.

A complete set of these early AFL gems can be found HERE on the Vintage Football Card Gallery.