I have mentioned in the past how neat I think it was that professional football was not as big of a production as it is today.  The simpler times allowed for greater fan interaction, which I believe, helped develop lifelong admiration for AFL players from the people who cheered them each week.

I found this video on YouTube, and thought that it really helped illustrate the AFL’s humble beginnings.  This appears to be a home movie taken by a Patriots fan in 1960.  I find it fascinating that fans could get so close to the team, even during practice.  I have heard similar stories of kids visiting Chargers practices at Sunset Park in La Mesa, but this video is proof.  It is also neat to see everyone lining up to take a team photo, the final results of which are below. 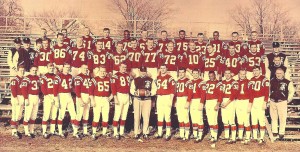