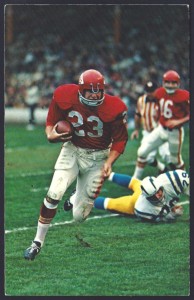 I purchased a postcard the other day.  No, it didn’t come from one of those ubiquitous carousel display racks, but rather from eBay.  It is a beautiful color postcard of the Kansas City Chiefs running back, Bert Coan running downfield.  In the backfield Len Dawson watches Coan’s progress, as does downed Chargers lineman, George Gross, who looks to have just missed a tackle.  I find the postcard very attractive, and had hoped that there might be more Chiefs postcards from a series, or something along those lines.  I had seen a handful of the Coan cards up for sale over the years, but never another player. 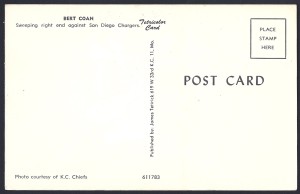 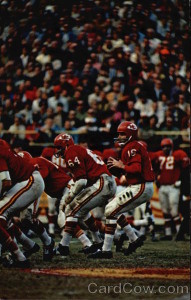 I’ve recently done a bit of digging around online in an effort to learn more.  I was thrilled to be able to find a card of Chiefs quarterback Len Dawson (which I purchased), that appears to be from the same set at the Coan, but I still haven’t found any new information.  I know that the card was produced no earlier than 1966, as that was the only year that the Chargers wore solid blue bolts on their helmets, as seen on George Gross.  Coan retired after the 1968 season, so it is likely that the postcard was made between 1966-1968, though it could have possibly been made later.

The back has standard postcard info.  It was published by James Tetirick of Kansas City, MO, and is labeled as a “Tetricolor Card.”  There is a number 611783 (card number?  series number?) on the back, as well as a line noting that the photo came courtesy of the Kansas City Chiefs.

So, does anyone have any info on these cards?