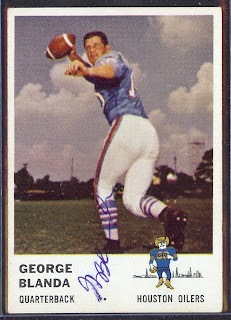 Legendary pro football ironman, George Blanda, was more than a year into retirement from an NFL career that had lasted 10 seasons when he decided to strap on his cleats once again and play quarterback for the Houston Oilers of the upstart American Football League.  Blanda, who had played his college football for Paul “Bear” Bryant at the University of Kentucky, provided veteran leadership to the team that he would lead to the league’s first championship in the inaugural season of 1960.
Returning to the Oilers in 1961, Blanda started up right where he had left off, and began throwing the ball around at a breakneck pace.  He completed 187 of 362 passes that season, for a league-leading 3,330 yards.  He was atop all other AFL quarterbacks in the areas of Yards-Per-Attempt (9.20) and Touchdown Passes (36).  Blanda’s top receiver, Charlie Hennigan, led the league with 1,746 receiving yards in ’61, the highest total in the AFL’s 10-year history.
George Blanda doubled as the Oilers’ kicker, in addition to his quarterbacking duties.  In 1961 he topped all AFL kickers with a 61.5% field goal percentage, and converted a league-leading 98.5% of his field goal attempts, connecting on 64-of-65 attempts.
Blanda and the Oilers faced the Chargers in the 1961 AFL championship game, a repeat of the 1960 title match.  Blanda led the Oilers to a second-consecutive AFL title with a 10-6 victory in a defenive struggle that saw only one touchdown.  The Oilers points came on a Blanda 25-yard TD pass to Billy Cannon, a Blanda extra-point, and 46-yard field goal.
Football pundits across the nation praised Blanda’s efforts in ’61, and he was named AFL Most Valuable Player by all three voting bodies, the United Press International, Associated Press and The Sporting News.
By Todd Tobias|2012-04-09T17:10:00-07:00April 9th, 2012|AFL, American Football League, George Blanda, Houston Oilers|9 Comments