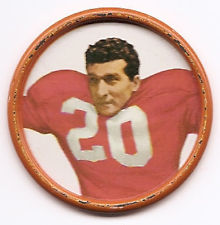 One the neatest of AFL regional “card” issues (at least in my mind) is the 1962-63 Salada coins set.  These small coins (1.5″ in diameter) were packaged with Salada Teas and Junket Pudding.  Of the 154-coin set,33 coins represent AFL players.  Only players from the Boston Patriots, Buffalo Bills and New York Titans are included, no other AFL teams were produced in the set.  The following description of the set can be found in the Beckett Football Card and Price Guide, 27th Edition.