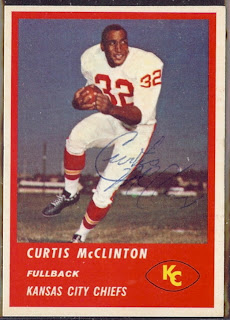 With their 14th round pick in the 1962 AFL Draft, the Dallas Texans selected Kansas running back, Curtis McClinton.  McClinton, who had opted to return to Kansas for his senior year rather than sign with the Los Angeles Rams who had chosen him in the 1960 NFL Draft, had teamed with future Chargers quarterback, John Hadl, to lead the Jayhawks to a 7-3-1 record and a 33-7 victory over Rice in the Bluebonnet Bowl.
With Abner Haynes secure at the halfback position, McClinton moved into the fullback slot.  There he blocked for Haynes while the fleet-footed back scampered for 1,049 yards and 13 touchdowns.  Additionally, McClinton carried the ball 111 times for 604 yards (5.4 average) and two touchdowns.  He also hauled in 29 receptions for 333 yards (11.5 average).  For his efforts McClinton was named AFL Rookie of the Year.  In the AFL All-Star Game, McClinton rushed eight times for 104 yards, including a 64-yard touchdown run, and was named Offensive Player of the Game.
Curtis McClinton played from 1962-1969 with the Dallas Texans/Kansas City Chiefs.  In 107 career games, the 232-lb. back rushed 762 times for 3,124 yards (4.1 average) and 18 touchdowns.  He had 154 receptions for 1,945 yards (12.6 average) and 14 touchdowns.  Today, some 43 years after his retirement, Curtis McClinton is still the Chiefs eighth all-time leading rusher.
By Todd Tobias|2012-04-02T14:47:00-07:00April 2nd, 2012|AFL, American Football League, Curtis McClinton, Dallas Texans, Kansas City Chiefs|7 Comments