Perhaps the least-followed documented of AFL teams is the early Denver Broncos.  Not particularly successful on the field, under-funded and sporting those dreadful brown and yellow uniforms, it can be difficult to find good info on the earliest of Denver teams.  Guest blogger extraordinaire, Dave Steidel, takes a look at the 1962 Denver Broncos.

“There’s Lots New in ‘62” was the Denver Broncos rally cry as the Jack Faulkner era arrived after two years of futility with records of 4-9-1 and 3-11 under Frank Filchock.   While wearing the most ridiculous uniforms in pro sports that included a color scheme of brown and gold with vertically striped socks the Broncos were known more for their hideous look than their professional prowess.  Under Filchock there was no play book, rarely a game plan and ran plays that were often drawn up the same way you or I did on the sandlots, in the dirt in the huddle.  For two years they were the league’s worst running team but third best passing team and were outscored by 265 points.  They threw more than 500 passes in each season and were averaging only a little more than 10,000 fans for their home games.  Clearly things in the mile high city were in need of change, and the new ownership acted swiftly after the 1961 season ended.  First to go was coach Filchock.  He was replaced by highly regarded Jack Faulkner who had been on Sid Gillman’s staff at the University of Cincinnati, with the Los Angeles Rams and LA, now San Diego Chargers.  GM Dean Griffing was the next to go, with Faulkner also assuming his role, giving him full control of the football operations in Denver.  Noting that the rest of the league viewed the franchise as a joke, he started the changes with the ‘bush league’ uniforms.  Making his first line of business to change the team colors and design new uniforms and helmets. Which he believed would lift the team’s morale and regional pride.  The changes were met with overwhelming approval.  Gone were the mustard and mud uniforms, in favor of bright orange, blue and white ones.  Also gone were the chocolate helmets with white numbers on the side and new were was the orange look with a single white stripe down the middle and a brown bronco on the sides.  However the brown bronco did not last long.  Difficult to see from the stands and television screen, the brown bronco was replaced by a white one after a few exhibition games.

Faulkner even devised a fan participation bon fire before the first pre-season contest in which the players ran around the field before hand, dropping the bane of their existence, the vertically striped socks, into the fire amid cheers from the crowd.  The image and attitude in Denver was finally transformed into one of hope and pride.  The Bronco jerseys were orange with white trim and numbers at home and white with blue numbers and trim on the road.  The original change called for brown numbers on the white shirts but was changed with the helmets so there would be no memory of the colors and seasons of the past.

With their new image in place, Faulkner also incorporated a game plan each week which the players loved.  For the first time they felt prepared and ready for every opponent.  As the players became more familiar with the system, the successes followed.  After losses in their first two exhibition games to perennial power houses Houston and San Diego, the Broncos turned the corner in their third contest against Dallas.  In the first ever sudden-death overtime game the Broncos defeated the Texans 27-24 to get the winning started.  They closed out the pre-season with a 41-12 victory over Oakland to even their record at 2-2, their best exhibition season to date.

On the first Friday night in September the Broncos saddled up to face the Chargers in Denver in front of a record crowd and a balmy 71 degrees.  Prepared like never before, and with their new duds and morale as bright as the stadium lights, the ‘new’ Broncos stunned the Chargers by taking a 24-7 halftime lead and never looked back.  Led by Frank Tripucka who completed 28 passes for 376 yards the home team surged to a 30-21 victory.  The following week proved to be another big change for the Broncos, a comeback win!  After trailing 20-3 in Buffalo, the Broncos scored 20 unanswered points in the second half to win their second game in a row.  A loss in Boston was followed by another win in New York and back-to-back wins against Oakland, which set up their biggest game of the season against the defending AFL champion Houston Oilers.

Another record crowd of 34,500 fans jammed into Bear’s Stadium to see if their 5-1 Broncos were for real against the two-time AFL champs who brought a 4-1 record to Colorado on October 21.  The new and successful orange-men had caught the imagination of the fans to the point of now having overflow crowds being turned away at the gate, sending thousands of fans to set up camp on the hillside at one end of the field to see the game.

At halftime the Broncos led 6-3 on two Gene Mingo field goals, but in the third quarter the Oilers went ahead 10-6 when Billy Cannon plunged over the goal line from 2 yards away.  The rugged Denver defense had kept the Oiler runners in check for most of the day, giving up only 67 yards while Tripucka was having another splendid afternoon leading the offense, although the Broncos twice had touchdowns called back; the most frustrating being an 80 yard throw to Taylor.

Trailing the champs in the fourth quarter in the past would have spelled doom, but in the ‘Lots New in ‘62’ plan it was time to kick into high gear.  A three yard touchdown pass to Bob Scarpitto and a 20 yard dash into the end zone by Donnie Stone put the Broncos over the top and sealed the 20-10 victory, giving them a franchise best 6-1 record and kept them on the top of the West.  The town was in a frenzy and as can be expected, title game hopes were swirling, although no-one knew that the best of two 1962 seasons was over.

With only seven rookies making it through camp, the Broncos had essentially the same squad as the 3-11 team from last year.  But with the new look and professional approach, the team had begun to jell.  Tripucka continued his ‘coach on the field’ leadership and throwing talent, most times hooking up with split end Lionel Taylor who was on his way to another league leading performance with 77 catches.  Tight end Gene Prebola and flanker Bob Scarpitto rounded out a steady group of receivers and fullback Bo Dickinson stepped up to grab 60 aerials.  Halfbacks Donnie Stone, Gene Mingo and swift Al Frazier filled out the backfield.  The defense was anchored by all-league tackle Bud McFadin and his front line mates Gordy Holz, John Cash, Don Joyce, Chuck Gavin and Ike Lassiter.  The starting linebackers included Wahoo McDaniel in the middle with Jerry Stalcup and Bill Roehnelt on the sides with all-stars Goose Gonsoulin and Bob Zeman as safeties.

The second season began at home with the 2-5 Bills scoring that last 22 points of the game in the fourth quarter after trailing 38-23, knocking the now 6-2 Broncos behind the 6-1 Texans.  The following week Denver again showed their ’62 moxie in San Diego with another fourth quarter comeback win (23-20) after trailing 20-7, lifting them back to the top of their division and putting more pressure and expectations on the resurgent team.

The group that had been playing loose and easy in the beginning was now starting to feel the strain of winning.  After having only a few designed plays in 1960 and 1961 to a playbook of forty or fifty in August, the system was becoming more complicated each week.  By mid-season the arsenal of options had grown to 150 different plays.  Faulkner was becoming more demanding, and the pressure of leading the league was getting to everyone.  The Broncos’ weaknesses had also become apparent and were now being exploited, particularly in the defensive secondary, and the team was misfiring on offense more often in the second half of the season.

A see-saw battle with Boston ended in a 33-29 loss after another valiant comeback effort that had them behind 23-9 in the third quarter, setting up the biggest game in franchise history, pitting their 7-3 record against the 7-2 Texans next.  As the snow fell on Denver, the Broncos record fell to 8-4, losing 24-3 to Dallas after a 92 yard TD pass in the fourth quarter broke the game open for Dallas. 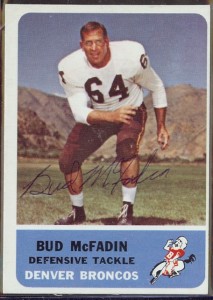 Probably the craziest game of the year happened on Thanksgiving Day in Denver against the Titans.  After trailing 24-7 in the second quarter the Broncos put on their best comeback effort with two defensive touchdowns in the second half.  Bud McFadin ran a fumble back 69 yards in the third and Jim McMillin returned an interception 59 yards in the fourth.  After a 49 yard field goal by Gene Mingo the Broncos took a 45-32 lead.  All they needed to do was hold on for four more minutes and they would still have a fighting chance to pull even with Dallas, who they still had to meet one more time.  But it was not to be!  The Titans scored two touchdowns in the waning minutes to hand Denver a heartbreaking 46-45 loss, moving their record to 7-5 and ending the title hopes in the Rockies.

Two more losses, to Houston and Dallas, ended the Broncos second season at 1-6, after their 6-1 start.  What began in July as a revitalization movement looked to be a successful transformation in November, but ended as a disappointing 7-7 finish in December. Still, their .500 season was looked upon as a successful turnaround on which to build.  Although as the history of the AFL unfolded, their 1962 record would end up being the team’s high water mark.

At year’s end the Broncos led the league in passing and moved out the basement in rushing, scored 100 more points and surrendered 100 less, coach Faulkner was named AFL coach of the year by both wire services, Lionel Taylor, Goose Gonsulin and Bud McFadin were name to the all-league team and home attendance was up more than 100 percent over the previous year.  They may not have finished on a high note, but football life in Denver was never better.