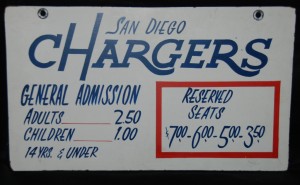 Several years back, I was able to attend the estate sale of Phil Barile, the Los Angeles and San Diego Chargers first ticket manager.  Barile joined the Chargers in 1960, and stayed with the team through the 1979 season.

Barile lived in a small retirement community near San Diego State University, and had just moved to Arizona to be closer to family when the sale was conducted.  When his condominium was set up for the sale, it looked like a private Chargers gift shop.  Two bedrooms and much of the living room were dedicated to the “accumulations” of his career.  Programs, t-shirts, caps, trading cards, pennants, photos, drinking glasses, awards, jackets, and nearly every other thing imaginable could be found.  If it had a Chargers logo on it, the Phil Barile likely had one…  if not five.

I was able to add some very neat pieces to my budding AFL collection.  Two sets of rare 1962 Union Oil trading cards, a 1960 Los Angeles Chargers cigarette lighter, some Chargers drink coasters from the lounges at the Los Angeles Coliseum, and more.  But the piece that means the most to me from that sale was a Chargers ticket sign that once hung either at Balboa Stadium, or at the Chargers ticket office in the Lafayette Hotel.  Based on the listed prices, this painted pressboard sign was used in the 1964-1966 seasons.