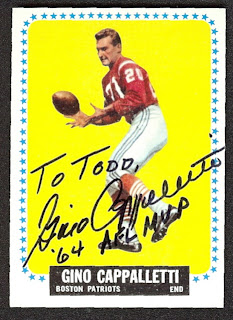 Gino Cappelletti was a bartender in his brother’s tavern in Minnesota when he heard about the new football league that was forming to rival the NFL.  He went undrafted out of college, but had played a year of semipro ball in Canada, and tried out for a quarterback position with the Detroit Lions, though none of it had amounted to much.  It was while playing for a bar-sponsored team in a touch football league that he got a telephone call from the Boston Patriots, asking him to come out and give one more run at professional football.  As they say, the third time was a charm.
Gino Cappelletti earned a spot on the Patriots roster as a sure-handed and intelligent receiver, while also doing the place-kicking.  His success was immediate and enduring.  When the two leagues completed the merger in 1970, Gino Cappelletti was the AFL’s all-time leading scorer with 1,130 total points.
Coming off the 1963 season in which he had led the league in field goals (220, field goal attempts (38) and points (113), Cappelletti and the Patriots burned up the AFL’s Eastern Division.  The Patriots went 10-3-1 in ’64, and just missed a second-consecutive opportunity to face the Chargers in the championship game.
On special teams, Gino Cappelletti matched his 1963 accomplishments by again leading the league in field goals (25), field goal attempts (39) and total points (155), and he was a perfect 36-for-36 in extra-point conversions.  In addition, he nearly doubled his production from the receiver position, finishing the season with 49 receptions for 865 yards (17.7 average) and seven touchdowns.  His 155 points ended up being the highest single-season total for any player in league history.
Football writers across the nation recognized his superb season, and Gino Cappelletti was a unanimous choice for 1964 AFL Most Valuable Player, earning the honor from all three voting bodies, the Associated Press, the United Press International, and The Sporting News.
By Todd Tobias|2012-04-18T14:02:00-07:00April 18th, 2012|AFL, American Football League, Boston Patriots, Gino Cappelletti|10 Comments