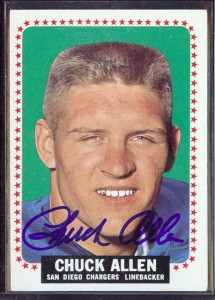 With their 1964 effort, Topps doubled the size of the AFL set from what Fleer had produced the year before, going from 88 to 176 cards.  The cards themselves were simple in design, with players featured against a colored background, bordered in stars.  The player’s name, team and position was listed in a box and the bottom border.  From a quality-control standpoint, the set was plagued by centering issues.

With the expanded set size, many players had their first trading cards in 1964.  Daryle Lamonica, Dave Grayson, Chuck Allen, Matt Snell, Bobby Bell and Buck Buchanan are great AFL’ers that made their pasteboard debuts with the ’64 set.  In addition to an expanded player base and two checklist cards, Topps also included team cards in the 1964 set, a feature that they did not included in their sets again until long after the AFL and NFL merged.  The team cards offered fans not only a very small glimpse of the full AFL squads, but the obverse of the cards had a host of team information and statistics that was not as easily accessible in the pre-internet era. 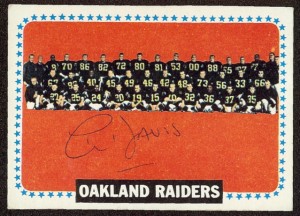