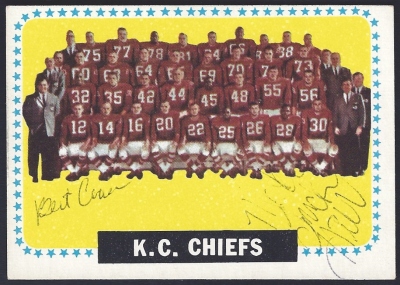 As a collector of autographed card sets, there is little opportunity for me to be creative with my collection.  Basically, if a former player or coach is pictured on a card, then I try to get it autographed.  I have had better success that I could have honestly hoped for in this endeavor, and I am missing fewer than 25 cards out of a possible 1,278.

Yet even with this rate of completion, there are literally hundreds of AFL personalities that never had their own card produced.  It seems a shame for men such as Sonny Werblin, Lamar Hunt, Al Davis and Mack Lee Hill to not be represented in an AFL collection simply because of a lack of trading cards.  This is where the 1964 Topps team cards become so valuable, and allow for my collection to be grown exponentially.

Of the 10 years of AFL trading cards, 1964 was the only year that either Topps or Fleer decided to include team cards in their sets.  The cards are rather simple in design, just a team photo (of the 1963 squads) on the front, head coaches and top players listed on the backs.  Yet because they represent an entire team instead of a single player, it makes perfect sense to use these cards to obtain the signature of a team owner, coach, executive, announcer, player or even sportswriter who covered a given team.

It is on these team cards that I have recently focused my collecting time and energy.  I have added the following page to Tales from the AFL to feature autographed team cards:

Does anyone else have these cards in their collection?  Signed by whom?