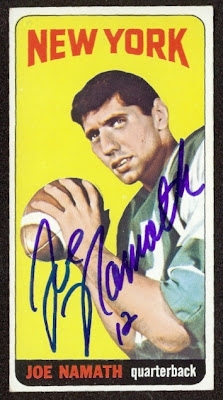 Joe Namath made a huge splash in the American Football League long before he ever played in his first professional football game. After a fantastic college career at the University of Alabama, Namath signed a then-unheard of $427,000 contract with the New York Jets, instantly making himself a topic of conversation in football circles across the country.
Namath earned his hefty paycheck in 1965, not only because of the media coverage and promotion that he and the Jets received, but also with his play on the field.  In his rookie season, Namath completed 164 of 340 passes for 2,220 yards and 18 touchdowns.  He led the AFL Eastern Division with a .482 completion percentage.
The rookie quarterback received his share of postseason awards.  He was named to the AFL all-star team, and was a runaway winner of the AFL Rookie of the Year Award.
Joe Namath’s career spanned from 1965-1977.  He played the whole time for the New York Jets, with the exception of four games in 1977, during which he was a member of the Los Angeles Rams.  The highlight of his career was not only leading the Jets to a 16-7 upset victory over the Baltimore Colts in Super Bowl III, but guaranteeing that victory days before.  Namath was inducted into the Pro Football Hall of Fame in 1985.
By Todd Tobias|2012-03-21T18:23:00-07:00March 21st, 2012|AFL, American Football League, Joe Namath, New York Jets|6 Comments