1967 Milton Bradley Cards… A Discovery for Me

1967 Milton Bradley Cards… A Discovery for Me

I thought I knew AFL-era trading cards pretty well.  I’ve been collecting them, both with and without signatures, for a couple of decades.  I’ve bought them, sold them, traded them, read about them, talked about them and written about them.  I’ve sorted cards, made lists of cards, got cards graded, admired collections…  I know a bit about cards.  So you can imagine my shock when I purchased an autographed 1967 Milton Bradley Paul Lowe card on eBay last week, and after a bit of research came to the conclusion that I had filled one of my sets with incorrect cards.

Although I had never pursued the set, I had known that in 1967, Topps made a set of trading cards for the board game company, Milton Bradley, to be used in one of their games.  I knew that they looked almost identical to the standard 1967 Topps football cards, but I assumed that there was some sort of marking that differentiated the Topps cards from Milton Bradley.  Apparently, I was wrong.

There are two ways to tell between the card types, and both can be a bit vague.  First, and the one that should always work, is by checking the color of the printing on the card backs.  The difference can be slight at times, but the Milton Bradley cards have a bright yellow back, while their Topps counterparts have a darker gold color. 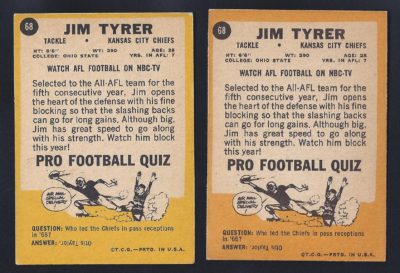 The other thing to look for is more obvious, but unfortunately only appears on some of the Milton Bradley cards.  In addition to 1967 Topps football cards, the board game for which these cards were made also used a version of the 1968 Topps baseball and 1968 Topps Hot Rod cards.  As these were all special issue cards, they were printed together on a single sheet.  On the sheet, the rows of football cards were placed in-between rows of the 1968 baseball cards.  As a result, if the centering was off a bit when the cards were being cut from sheets, a thin sliver of the burlap pattern from the baseball cards will be left on either the top or bottom edge of the football cards. 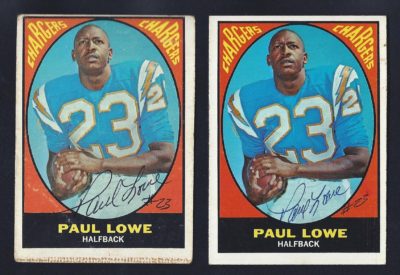 After exchanging information with a very advanced collector of the Milton Bradley cards, I learned that he believes there to to be a roughly 30-to-1 ratio of Topps to Milton Bradley football cards.  He believes baseball cards are more along the lines of 100-to-1.  So the Milton Bradley card are more rare than the Topps, but honestly, few dealers and collectors know enough to make the distinction.  This is where I enter into the picture.  Because after looking through my fully-autographed 1967 “Topps” set, I realized that eight of the 132 cards were actually Milton Bradley issues.  My Billy Shaw, John McCormick, Ode Burrell, Jim Tyrer, Rich Zecher, Winston Hill, Joe Namath (gulp!) and Daryle Lamonica cards all had bright yellow backs. 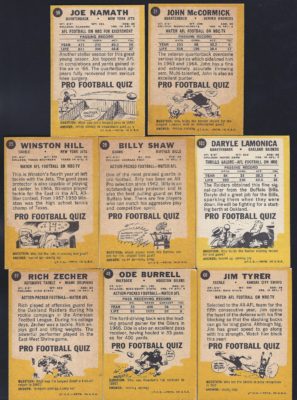 I’m not sure whether to be pleased or frustrated.  The disappointing part is that a set that I’ve thought for the past two years was already complete, now needs eight additional cards, and I have to replace my Joe Namath!  A bit more uplifting, however, is that fact that I’ve already got some of the more difficult cards from the rare Milton Bradley set.  In the end, I guess that I will put on my rose colored glasses, take a sip from my half-full cup, and be happy that I have a new set to collect.