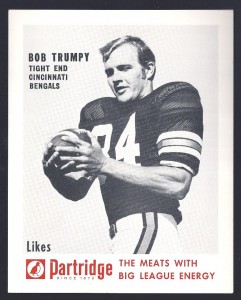 I recently picked up this card of Cincinnati Bengals tight end, Bob Trumpy.  The card comes from a rather obscure set that was distributed in the Cincinnati area, by Partridge Meats.  The Beckett website had the following notes on this series:

This black and white (with a little bit of red trim) photo-like card set features players from all three Cincinnati major league sports teams of that time, Cincinnati Reds baseball (BB1-BB18), Cincinnati Bengals football (FB1-FB5), and Cincinnati Royals basketball (BK1-BK2). The cards measure approximately 4″ by 5″, although there are other sizes sometimes found which are attributable to other years of issue. The cards are blank backed. In addition to the cards listed below, a “Mr. Whopper” card was also issued in honor of an extremely large spokesperson. The Tom Rhoads football card was only recently verified, in 2012, adding to the prevailing thought that these cards were issued over a period of years since its format is slightly different than the other four more well-known football cards in the set.