The American Football League had two rookies of the year in 1969, the Cincinnati Bengals quarterback, Greg Cook, and the Boston Patriots running back, Carl Garrett. 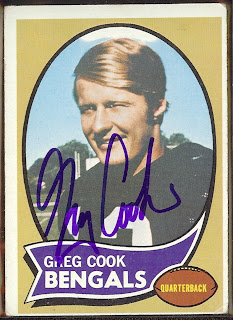 Greg Cook, a strapping 6’4″, 220-lb quarterback with the University of Cincinnati, was the fifth players selected overall in the 1969 draft, taken by the Cincinnati Bengals.  Cook immediately took over the starting quarterback position with the Bengals, and though a shoulder injury initially kept him out of three games, he still threw for 1,854 yards and 15 touchdowns.  Cook averaged a phenomenal 18 yards-per-completion in 1969, 9.41 yards-per-attempt, and was named an AFL Rookie of the Year.
Despite his success, Cook’s shoulder underwent several surgeries over the years, and he was never the same.  In fact, Greg Cook only played in one more professional game in his career.  In 1973, Cook entered a game and threw three passes, completing only one, for 11 yards.  He remained a member of the Bengals through 1974, but never played again.
Greg Cook passed away in January, 2012, due to complications with pneumonia.  “Greg was the single most talented player we’ve ever had with the Bengals,” said Bengals president Mike Brown said in a statement. “His career was tragically short due to the injury. Had he been able to stay healthy, I believe he would have been the player of his era in the NFL.” 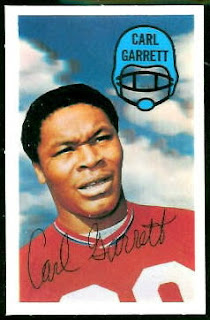 Carl Garrett, a running back out of New Mexico Highlands, was selected by the Boston Patriots in the third round of the 1969 draft, the 58th player taken overall. Garrett made an immediate impact on an otherwise lackluster Patriots offense. He rushed 137 times for 691 yards and five touchdowns, and led the AFL with a 5.0 yards-per-attempt average. He also had 29 receptions for 267 yards and two scores. Among his post-season honors were playing in the AFL All-Star Game, and being named Rookie of the Year, along with Greg Cook.

Garrett played four seasons with the Patriots, and also spent years with the Chicago Bears, New York Jets, and Oakland Raiders. He retired after the 1977 season, ending his career with 4,197 rushing yards and 35 offensive touchdowns.

Carl Garrett’s post football life has been marred by a rape conviction in 1985, for which he spent nine years in prison. In 2005, he had his parole revoked for failing to register as a sex offender, which caused him to serve another to years in prison.
By Todd Tobias|2012-03-27T18:12:00-07:00March 27th, 2012|AFL, American Football League, Boston Patriots, Carl Garrett, Cincinnati Bengals, Greg Cook|25 Comments