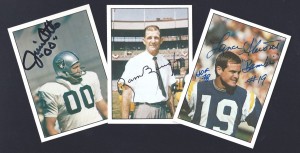 In 1981, TCMA, a sports card manufacturer that focused mostly on producing throwback sets of baseball and football cards, issued a set called “TCMA Greats.”  This 78-card football set featured a simple, yet beautiful design.  The front of the card is nearly pure, and features a gorgeous color photograph of the subject, framed in a simple white border.  The player’s name and other pertinent information is featured on the card back.  All athletes featured in the TCMA Greats played in the 1950s and 1960s, and as a result, several cards portray players from the American Football League.

I am a fan of this particular set, mostly because of the color photos of early AFL players.  However, I am left in a quandary when I think about the players selected for inclusion in TCMA Greats.  Of the 78 cards in the set, only 12 are devoted to AFL representatives.  Joe Namath and Lance Alworth, perhaps the two most popular players in the league, both have cards.  Hall of Fame members Jim Otto, Fred Biletnikoff, Don Maynard and New York Titans coach, Sammy Baugh, have cards as well.

Once you get past the Hall of Famers, though, things get more puzzling.  The remaining cards are as follows:

I have nothing against any of these players, but this is an odd group.  If only 12 cards were to be made for AFL players, then why not fill those slots with all Hall of Fame-caliber players?  Granted, this set was released before most AFL’ers were inducted into the HoF, but TCMA could still choose from Len Dawson, Jan Stenerud, Willie Lanier, Billy Shaw, Sid Gillman, Hank Stram, George Blanda, Bobby Bell, Buck Buchanan, Ron Mix, Nick Buoniconti, Willie Brown, or others?  Or some other short-lived, but dominant guys like Cookie Gilchrist, Earl Faison and Ernie Ladd?  Paul Lowe, Jack Kemp, Gino Cappelletti, Lionel Taylor, Ben Davidson and many more would not have seemed out-of-place in a set like this.

I’m not knocking TCMA, but this set is a puzzler for me.