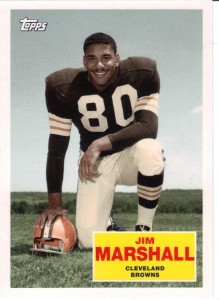 Back in the summer of 2009, I was quietly anticipating the upcoming football card sets.  I didn’t care about getting the new Peyton Manning, Brett Favre or LaDainian Tomlinson cards.  I was awaiting the plethora of great throwback sets that Topps and the other trading card companies would surely be distributing to recognize the AFL’s 50th anniversary.  Of course there would be an infinite number of cool possibilities.  Maybe a team set for each of the AFL championship teams from 1960-1969.  Or reproductions of the early Fleer sets.  Or cards representing league leaders for each of the seasons.  Or…  Or…  Or…

Fortunately, I didn’t hold my breath waiting for that really cool set, as I would have expired sometime around July of 2009, and we would not have this blog today.  None of my potential sets were produced.  No championship teams, no Fleer reprints, no league leaders.  No…   No…  Nothing.  Well, that is not completely true, but there may as well have been nothing.

Topps, my old standby in the trading card world, did put out a mostly AFL subset in 2009.  Ten cards were produced, in a subset called 2009 Topps Flashback.  The design was simple, yet not unattractive.  Colorized black and white images were used to represent players from the past.  Each card highlighted a particular moment in AFL history.  Decent stuff, but frankly, it was totally uninspired.  The checklist of players was:

Marshall?  Browns?  Yes, that is what I said as well.  What does Jim Marshall have to do with the AFL?  The answer is absolutely nothing.  The back of his card talks about how in 1960, Jim Marshall began his streak of playing in 282 consecutive games, every single one of which was played in the NFL.  Frankly, I’m not sure what exactly Topps was trying to achieve with this.  Nine of the 10 cards in the set were AFL-related, and then there is Jim Marshall.  Accident?  Done on purpose?  Was this actually not an AFL set?

The truth is that I do not know the answer, and really, I don’t care.  The trading card companies had a golden opportunity to produce and attractive, interesting and historically-significant set of football cards, and they all fell flat on their faces.  It is sad, really, as a whole host of modern card collectors could have been introduced to the American Football League, but instead, this handful of “flashback” cards got sorted to the bottom of the stack, and the AFL was again snubbed by those in power.