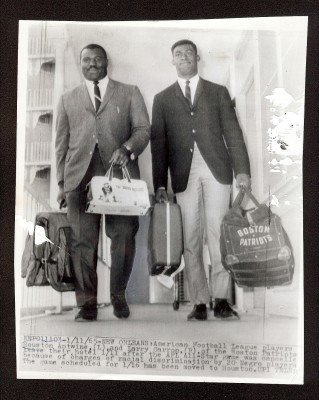 JANUARY 11, 1965 – NEW ORLEANS – American Football League players Houston Antwine (L), and Larry Garron (R), of the Boston Patriots leave their hotel 1/11 after the AFL All-Star Game was cancelled because of charges of racial discrimination by 20 Negro players. The game scheduled for 1/16 has been moved to Houston.

…One of the greatest, yet most unknown protest in professional sports took place.  On January 11, 1965, 21 African-American football players from the American Football League walked out of the City of New Orleans, refusing to take place in the all-star game because of the discrimination that they had faced.  Led by Cookie Gilchrist and Art Powell, these men stood up for their beliefs, and in doing so made a statement that helped bring about integration in the South.

Several articles have since been written about the event.  Below you will find links to some of my favorites.