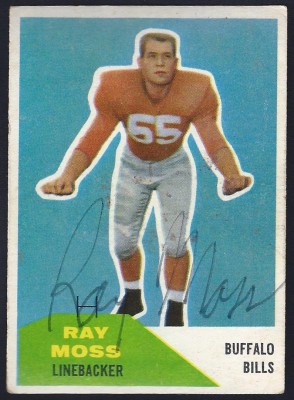 It has been several years since I’ve received any AFL-related gifts for Christmas, and this year was no different.  However, I purchased an autographed trading card on eBay recently, and it arrived in the mail on Christmas Eve, so I’m counting it as a gift to myself.

Collectors of vintage football cards are familiar with the fact that a large number of the players featured in the 1960 Fleer set never actually played in the AFL.  The set was produced and released early in the football year, during the AFL’s inaugural season.  As a result, player selection for trading cards was a very speculative process, and roughly 25% of the players featured on cards never made their team’s final rosters.

A few years ago I did some extensive research into these particular players.  Who was still alive?  Who was not?  What were their dates of death?  Did their university alumni association have current contact information, and would they forward a trading card and autograph request for me?  The results of my study were actually quite good.  I eventually got to the point where there was just one player (Buddy Mayfield) out of the 132 cards in the set that I could not locate or whose status I could not determine.

As expected, many of the athletes were deceased.  Most passed away in the 1990s and 2000s, but some had died earlier.  Ray Moss, out of the University of Tennessee and listed on his card as a Buffalo Bills linebacker, was the one that I figured would be the most difficult autographed card to obtain.  I learned that after being cut by the Bills, Moss left football.  I did not see him resurface until 1976, when I found in an online version of the University of Tennessee Alumni Newsletter, that he had died that year in a personal aircraft crash.

I’ve been collecting signed AFL cards since 1998, and had never seen an autographed Ray Moss card until two weeks ago when one popped up on eBay with a starting bid of just $4.99.  I watched the auction closely, and grew a bit concerned when bidding began to creep up on the last day.  Collectors of rare cards often lie dormant during auctions until they swipe in and place large bids in the closing seconds, and I was hoping that this would not be the case with Moss.  My concerns turned out to be unnecessary, and I ended up winning the auction for a mere $16.05.  I quickly sent of a Paypal payment, and hoped that the card didn’t somehow get lost in the holiday mail.

The USPS followed through in fine fashion, however, and the card even landed in my mailbox a day before its scheduled arrival.  Now it resides right where it belongs, in my 1960 Fleer binder, between Fran Rogel (#43) and Tony Banfield (#45), bringing me one large step closer to completion.  You can see my set in-progress (currently 14 cards short) at: 1960 Fleer Autographed Set

So…  Any other AFL-related Christmas gifts out there this year?