A Big Raid That Really Paid Off – An S.I. Vault Article

A Big Raid That Really Paid Off – An S.I. Vault Article 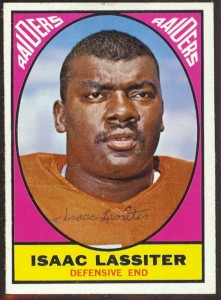 A BIG RAID THAT REALLY PAID OFF

I was skimming through Sports Illustrated’s online article vault, and came across this piece that was written about the Oakland Raiders in 1967.  Looking back nearly 50 years, this article packed a lot of great history into just one page.

I was particularly interested to see that early reviews of the Tom Flores-Daryle Lamonica trade had the Bills getting the better end of the deal.  Of course Lamonica went on to become AFL MVP in 1967, his first year with the Raiders.  But at the time the article was written, Lamonica was doing well, while Glenn Bass, who also came to Oakland in the trade, had been cut in training camp by the Raiders.  Also, Al Davis is quoted as saying that Lamonica was the quarterback that he had wanted for a few years, so long as he couldn’t get the Jets to deal Joe Namath.  Imagine Broadway Joe in Silver & Black!

That Raiders defense was also suffocating.  They had Willie Brown and Kent McCloughan at cornerback, with Dave Grayson waiting in the wings.  Rodger Bird and Howie Williams played the safety positions.  Their defensive line was absolutely dominant – Ike Lassiter, Dan Birdwell, Tom Keating and Ben Davidson.  Their linebackers were perhaps the most unheralded unit on the defense, but still pulled down four interceptions and recovered 10 fumbles while making tackles all over the field.  Eleven Angry Men, indeed!