A Few Notes on Earl Faison

A Few Notes on Earl Faison

Chargers’ great, Earl Faison, passed away on June 12.  Regretfully, my website was down and I wasn’t able to post about it.

Earl was the first AFL personality that I met, way back in 1997.  I was a new employee at The San Diego Hall of Champions Sports Museum, and he had been inducted into our hall of fame in February 1996, so we saw a lot of each other at museum events.  When I decided to write my master’s thesis on Sid Gillman, Earl was the first interview that I scheduled.

We were close during some important years in each other’s lives.  I went through graduate school, got married, had a child, battled cancer, had another child, and wrote a book.  Earl retired from a long and distinguished career with San Diego City Schools, moved to Flagstaff, Arizona, and sadly went through a divorce.  We saw less of each other after Earl moved; most of our meetings then came about from Chargers alumni functions when Earl came back into town.  The last time we saw each other in-person was when we sat together at the Celebration of Life for Raiders’ legend, Ben Davidson, in the Summer of 2012. 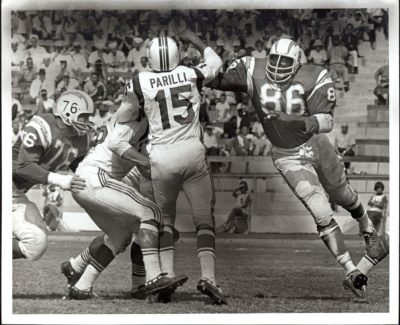 Earl Faison was an impressive figure, even into his 70s.  He never seemed to stoop with age, maintaining his 6’5″ height up to the end.  He had deeply dark skin, and always dressed impeccably.  Yet as formidably as he appeared, he was quick with a joke and smile.  I recall one of our early visits, back when Earl was the vice principal at University City High School.  He called me one day and asked if I would meet him at school, as he had something to show me.  I arrived in the early afternoon, and we chatted as we walked, ending up in a room in which about 150 people were eating.  “This is my friend, Todd Tobias,” Earl said to the crowd.  He is from the Hall of Champions Sports Museum, and is here to talk to you all about the value of athletics.”  Then he turned to me and said, “Todd, this is our varsity football team and their parents.  They are having a pregame meal, and are looking forward to your words of wisdom.”  With a wink and a laugh, he backed away and left me to give an impromptu pep talk to the room of football players and fans.  I’m sure I stammered a bit, caught completely off guard, but I got through it and we joked about the incident many times in the following years.

Earl himself was a great storyteller.  I enjoyed listening to his memories of growing up in Virginia, his time with the Chargers, and the race-based challenges that he overcame along the way.  He was an important man as a football player, a civil rights activist, a coach, an educator, and a friend.  I will miss him.

The San Diego Chargers and San Diego Union-Tribune posted stories about the passing of Earl Faison.

BOLTS CAN HONOR FAISON BY DOMINATING UP FRONT