A Floating Stadium for the Chargers?

A Floating Stadium for the Chargers? 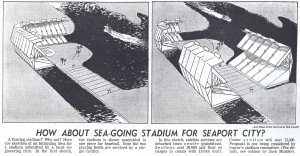 For the past decade-or-so, the Chargers have been attempting to get a new football stadium built in San Diego.  Many designs have been drawn, contemplated, and disregarded, including a unique facility that would have been built on San Diego Bay.  As a matter of interest, thoughts of a floating stadium were on architects minds back in 1964, when San Diego Stadium was first being designed.  These illustrations were published in the San Diego Union on June 11, 1964.  The caption reads:

HOW ABOUT A SEA-GOING STADIUM FOR SEAPORT CITY?

A floating stadium?  Why not?  Here are sketches of an intriguing idea for a stadium submitted by a local engineering firm.  In the first sketch, the stadium is shown assembled in one piece for baseball.  Note the two playing fields are serviced by a single facility.

In the sketch (second), sideline sections are detached from center grandstand.  Sections seat 20,000 and float on barges in canals with 11-foot draft.  Center section will seat 13,000.  Proposal is one being considered by mayor’s committee.