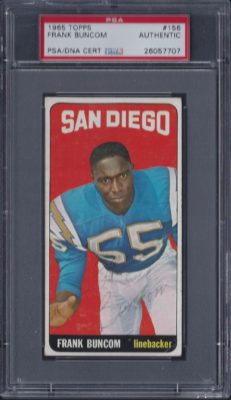 I posted recently after learning a bit about the 1967 Milton Bradley football cards.  Since then I’ve picked up more information about another AFL trading card, one which I thought that I already knew all about – the 1969 Topps Frank Buncom.

Those that have been visiting this site for a while know that I have a particular fondness for Frank Buncom.  While living, Buncom was a great linebacker, and by all accounts an even better person.  I have come to know his grandson, Frank Buncom IV, who now plays for Stanford, and I can say without hesitation that he is an equally special individual.  My interest in Buncom the ballplayer naturally (for me, anyway) translated into an interest in Buncom the collectible, and while he is pictured on five 1960s Topps cards, I needed one of each for my autographed sets. 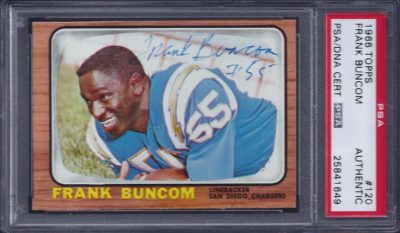 As Frank Buncom died unexpectedly on September 14, 1969, adding autographed examples of his trading cards to my collection has proven to be a challenge.  However, I have been doing this a long time, and with a bit of luck I have added several to my collection.  Still, the 1969 Topps card had always eluded me.  But I wasn’t concerned.  I didn’t think that it was even possible for Buncom to have signed this card. 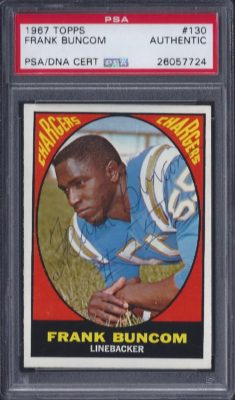 For those not familiar with trading card distribution, card sets used to become available to the public gradually over an athletic season.  In football, perhaps cards numbered 1-100 in a given set would be available in packs during training camp.  Once the season began, another portion of cards would be released.  Towards the season’s end, a third series of cards might then be released.  This spaced distribution system kept collectors buying cards all season long, improving sales for the company, and keeping fans interested with new cards.  The 1969 Topps Frank Buncom is a second series card, and as such, I had my doubts that the card would have been available to the public prior to his death on September 14.

Years ago, I had asked for input from the collecting community on how I might get this question answered.  I called Topps, but they were of little help.  Ultimately, one collector contacted a former Topps representative, who thought that the second series cards had been issued roughly two weeks after Buncom’s death, thus making the card impossible to have signed.  It was hardly iron-clad proof, but I hadn’t found anything better, so I came to believe that I would never own such a card.  I even mentioned this while writing for this site, and others.

At the beginning of the Summer, I saw an eBay listing for a 1966 Topps Frank Buncom card.  The card was autographed, and after comparing the signature to others in my collection, I made the purchase.  The seller and I sent messages back-and-forth, and he told me that he had a handful of other signed cards to sell, including another Frank Buncom.  A 1969 Frank Buncom. 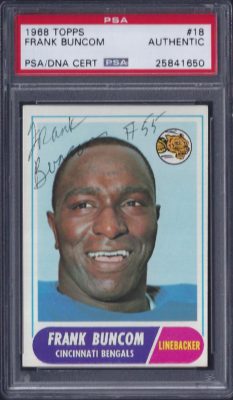 My interest was immediately piqued.  The seller said that he’d heard that the ’69 was a rare card, maybe even impossible.  While he didn’t want to sell anyone a bad autograph, he also didn’t want to keep the cards that he had.  We continued to communicate, talking about how he had obtained the cards, and what he might want for them.  In the meantime, or if I was looking at a recent forgery.  While my initial thought had been to focus on a release date for 1969 Topps cards, a few advanced collectors informed me that even an exact date would not provide the answer that I needed.  Cards are printed months prior to their official distribution dates.  Some slip out the door early as gifts to teams, samples to potential retailers… really any number of ways.  While it would still be an exceptionally rare card, it is quite possible that Frank Buncom could have signed his 1969 card before his passing.

So it was with just a glimmer of hope that I purchased the proposed 1969 Buncom.  It arrived in the mail a few days later, and after looking it over carefully, I thought there was a chance.  I have been in the process of slowly having my  collection authenticated by PSA, the leading third-part authenticator in the sports memorabilia hobby.  So shortly after I had the card in-hand, it went up to PSA to be judged by their team of experts.

I knew that the process would take about a month, but the excited little kid in me couldn’t help but doggedly check my PSA account online, hoping to see a result.  Just this week my results “popped” on the PSA website.   While another couple of cards were not passed, the 1969 Topps Frank Buncom was deemed to be authentic.  Shock, happiness and disbelief were the immediate emotions that ultimately gave way to simple happiness.

I’ve had some rare cards in my collection at times, and in fact still have a few.  The 1964 Chiefs team card signed by Mack Lee Hill comes to mind, as do cards of Dick Christy, Eddie Erdelatz, Ross O’Hanley and Emil Karas.  Still, none has the back-story of the Buncom.  While I have other cards in my collection that would be more appreciated by a larger group of fans, I consider the 1969 Buncom to be in a class all by itself. 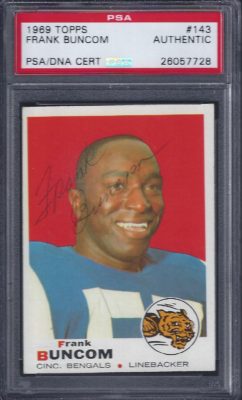