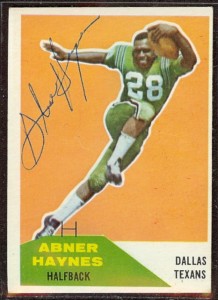 Abner Haynes was the AFL’s premier running back during the first half of the 1960s.  Despite the Texans/Chiefs having other talented backs during his time in Curtis McClinton, Mack Lee Hill, Jack Spikes and others, Haynes put together excellent numbers through 1964.  His overall production slowed after he left the Chiefs, and a relatively-short eight-year career would be the only real drawback that I can see to Haynes’ bust residing in Canton.  Thoughts?