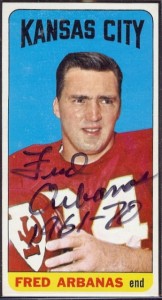 One of the things that strikes me about Fred Arbanas is his determination to overcome injury and continue to play at a high level.  He missed his rookie season of 1961, due to ruptured disks in his back.  He lost the sight in one eye after suffering a brutal mugging in 1964.  Certainly the AFL’s greatest tight end deserves recognition in Canton.  Thoughts?