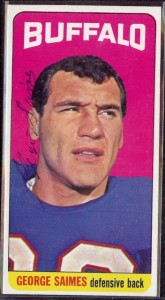 George Thomas Saimes…6th round selection by the Kansas City Chiefs in 1963 NFL Draft, joined the Bills in 1963…  Five-time AFL All-Star, three-time First Team All-AFL…  AFL champion in 1964 & 1965…  Had 22 career interceptions…  One of the most sure-handed tacklers in the AFL…  Member of the Buffalo Bills Wall of Fame… AFL All-Time First Team member.

Not as well-known as some other players, George Saimes was a safety in the mold of Johnny Robinson.  A fantastic open-field tackler, and hard hitter, Saimes was key member of the great Bills defenses during their championship seasons of 1964 & 1965.  Thoughts?

On a side note, Saimes was originally drafted by the Kansas City Chiefs.  Can you imagine him as a part of the legendary Kansas City defenses?  George Saimes and Johnny Robinson as your two safeties?  Holy smokes!