Today’s comparison is between Houston Antwine of the Boston Patriots and two HoF defensive tackles, Henry Jordan and Merlin Olsen. 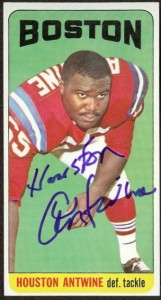 Houston Antwine is one of the AFL’s great unsung heroes.  In fact, in researching this piece I found a fantastic quote about Antwine by Ron Borges, a columnist for the Boston Herald.  “Houston Antwine was the kind of football player you don’t forget if you ever saw him, but he’s the kind few remember today because he did his playing before ESPN highlight shows existed. If they had, ‘Twine would have been a staple because he was everything you wanted in a defensive tackle — Warren Sapp before there was a Warren Sapp, but without the need for volume control.”  “Twine was an anchor on a tough Boston defensive line that also featured Larry Eisenhauer, Bob Dee and Jim “Earthquake” Hunt.  An exceptional ballplayer that gets overlooked at least in part, because he did not play on championship teams.  Thoughts?