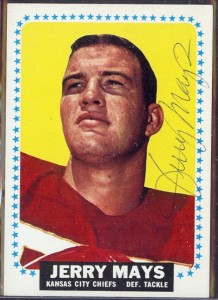 The more that I study them, the more I find myself in awe of the Kansas City Chiefs defenses of the late 1960s.  Bobby Bell, Buck Buchanan, Willie Lanier, and Emmitt Thomas have already been enshrined, and Curley Culp will join them this summer.  Johnny Robinson is a slam-dunk hall of fame member to everyone except the voting body, and then there is this guy, Jerry Mays, who made nearly every AFL All-Star team that it was possible to make, and ended up as a First-Team All-AFL member.  Mays was a dominant lineman at both the tackle and end positions, and his overall record clearly shows him to be deserving of HoF consideration (at a minimum).  I am starting to believe that the Chiefs of the late 1960s had so much talent that the HoF may never recognize another of their players.  In addition to the defensive members listed above, Len Dawson and Jan Stenerud are also HoF members, as are owner Lamar Hunt and coach Hank Stram.  That makes nine Chiefs of the late 1960s currently residing in Canton.  Pretty admirable.  The only thing is that the Pittsburgh Steelers teams of the 1970s currently have an even dozen of their members with HoF busts, so the precedent is there to still bring in Robinson and Mays.  Thoughts?