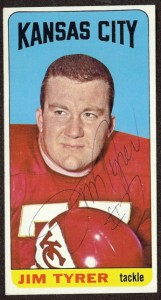 Frankly, there have been few, if any, offensive tackles that were better than Jim Tyrer.  At 6’6″ and 280 lbs., he was a prototype tackle, and one of the few players from the 1960s who could probably still hold his own in the modern NFL.  How is it possible that Tyrer was not inducted long ago?  Well, it most likely has to do with the end of Tyrer’s life.  In 1980, after a series of setbacks in business, Jim Tyrer took his life and that of his wife, in a murder-suicide.  He left behind four children.  While I don’t believe that any official statement has been made regarding reasons for Tyrer’s exclusion from Canton, this must be the main reason.  He was just too good, his accomplishments too great, to be kept out for any other reason.  Then again, his equally-impressive teammate, Johnny Robinson, is still awaiting his call as well.  Thoughts?