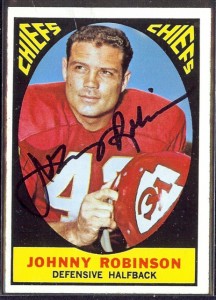 Johnny Robinson is perhaps the most egregious AFL omission from the pro football hall of fame.  He was a dominant defense back, and a leader of a very tough Kansas City defense.  Johnny Robinson’s career spans nearly the exact same period as Wilson and Wood, and despite his playing 1960 & 1961 on offense, Robinson’s numbers are still much better!  Truly, there is no legitimate reason for Robinson to have no been enshrined in Canton long ago.  Thoughts?