Today’s comparison is between Otis Taylor of the Kansas City Chiefs and two HoF receivers, Bob Hayes and Paul Warfield. 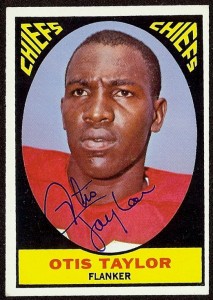 Here is yet another outstanding Kansas City Chiefs player from the late 1960s, which may or may not work in Taylor’s favor for hall of fame consideration.  At 6′-3″ and 215 lbs., Otis Taylor brought a rare combination of size, strength and speed to the Chiefs offense.  Taylor also excelled in both pre- and post-merger competition, which should make his accomplishments more attractive to HoF voters.  His career numbers are certainly within HoF ranges, but those who saw Taylor play say that his dominance cannot be expressed simply with statistics.  Take, for example, the SI article of November 15, 1971, which is subtitled, “Otis Taylor of the Kansas City Chiefs (89) has no peer at receiving a football—left-handed, right-handed or with his hands behind his back.”  And yet Taylor has received no call from Canton.  In fact, quarterback Len Dawson is the only offensive player from those great Chiefs teams that has a HoF bust.  It seems to me that like other AFL stars, Otis Taylor has not received his due from the Pro Football Hall of Fame.  Thoughts?