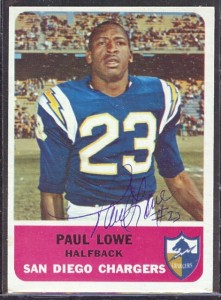 I find Paul Lowe to be an interesting player in regards to hall of fame credentials.  To his detriment, Lowe shared a backfield with Keith Lincoln, and had Lance Alworth split out wide, in addition to Don Norton and Dave Kocourek.  Had Lowe not had to share the ball with these other stars, his numbers would have been even better.  Additionally, his head coach always though pass-first, which took away more potential carries.  Still, Lowe was perhaps the most graceful runner the AFL had, was a threat every time he touched the ball, and he amassed nice career statistics.  I had known that Sayers did not have huge career statistics, but frankly I was shocked to see how unimpressive Hornung’s numbers were, especially given that he played on a running team, and his scoring totals are nearly doubled by the points he tallied as a kicker. Granted, he played very well in many championship games, and was still a great player, but his numbers do not scream “Hall of Fame.”   Thoughts?