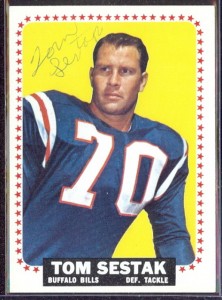 Tom Sestak was a dominant defensive tackle for the Buffalo Bills.  “Big Ses,” was an anchor of the Bills line from 1962-1967, when knee injuries ended his career.  There are only six defensive linemen who played in the 1960s, who were all-league selections in three-or-more seasons – Bob Lilly, Merlin Olsen, Gino Marchetti, Deacon Jones, Willie Davis and Tom Sestak.  Of the six, Sestak is the only one that is not a member of the Pro Football Hall of Fame.

Thomas Joseph Sestak…17th-round draft pick, 1962…Drafted as a tight end, but moved to defensive tackle in his rookie season…Leader of defensive line that was in AFL playoffs in 1963-66…Unanimous All-AFL defensive tackle three seasons in a row…Four-time AFL All-Star…Bills defense held opponents without a rushing touchdown for 17 consecutive games…Scored three touchdowns, two on interceptions, one on fumble recovery…Member of the AFL All-Time First Team…Died April 3, 1987, at age of 51.

Tom Sestak appears to have been every bit the ballplayer that the Davis, Jordan and Lilly were.  His injury-shortened career perhaps plays against him, but he was very impressive during his time.  What do you think?