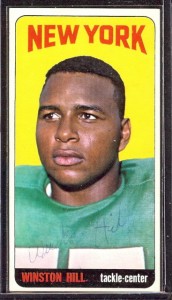 When discussing AFL offensive tackles, Jim Tyrer and Ron Mix are usually the players most thoroughly discussed, while Winston Hill is somehow overlooked.  Hill was a workhorse on the Jets line, playing in 195 of 196 games during his 14 seasons in New York.  With eight all-star/pro bowl appearances, he matches Mix and falls short to Tyrer by just one.  He was also a member of the Jets Super Bowl III team, and fended off a tough Colts defensive charge, and while helping lead Matt Snell to 121 yards rushing.  Additionally, Hill excelled in both the pre- and post-merger eras.  How is it that this man has never even received a sniff from HoF voters?  Thoughts?