A Letter, A Card and Cosmic Connections

A Letter, A Card and Cosmic Connections

This summer has been busy for me, and I’m sorry to say that it had a direct effect on my AFL postings.  Youth lacrosse, freshman football, and much more have had my head swimming.  But I’m here today, with a fun, feel-good AFL collecting story that occurred over the course of my summer.

I’ve been collecting sports cards for 37 years now, since getting an unopened box of 1978 Topps baseball cards as a gift from my father at the age of five. Since then I’ve been fortunate to have several interesting card-based experiences in my life, though perhaps none have been as unexpected as a situation leading up to my obtaining an autographed copy of Frank Buncom’s 1967 Topps football card. 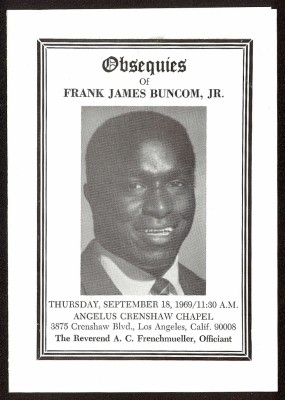 I’ve long had an interest in Frank Buncom, the former AFL Chargers linebacker who died of a pulmonary embolism at age 29. A three-time AFL All-Star, Buncom was a member of the Cincinnati Bengals at the time of his death. Over the years I have built up a considerable Buncom collection. I have his signature on trading cards, game programs, Christmas cards, team balls and other items as well.

I was looking through my Facebook feed one morning several years ago when I came across a post by my high school football coach. I don’t recall that subject of the post, but I remember seeing a response by a young man named Frank Buncom IV. I knew that Buncom’s wife and young son (Frank Buncom III) had remained in San Diego after his death, and figured that this young man had to be related to the former Charger. I dropped him a message, and he confirmed that he was Buncom’s grandson. He was a high school freshman at the time, and was already being touted as a prep football player of note.

I had my first opportunity to meet Frank IV in person when a local television sportscaster called a few months after our Facebook encounter, and asked if I had any material pertaining to Buncom the former Charger. I confirmed that I did, and he asked if I would be interested in taking some pieces to St. Augustine High School, where he planned to do a story on Frank IV. He wanted to get some footage of me sharing my collection with the young football star.

After that time, Frank IV and I communicated occasionally via Facebook. I was always impressed with his manners and depth for a young man. On the football field he was earning great recognition as a defensive back, and being touted as a top prep player in the country.

I downsized my collection in the Summer of 2014, and when I did so, I held out a small handful of pieces that I gave to people, rather than attempting to sell. Some had decent monetary value, others were just interesting, and I thought would be appreciated by certain friends. I sent Frank IV an 8×10 Chargers team issued photo that had been autographed by his grandfather, along with a signed 3×5. I’d never seen another Buncom signed photo, and thought that Frank IV would like having it. Roughly a week later I received a very nice thank you note, along with a signed card of Frank IV that had been produced for one of the high school football camps that he had attended. 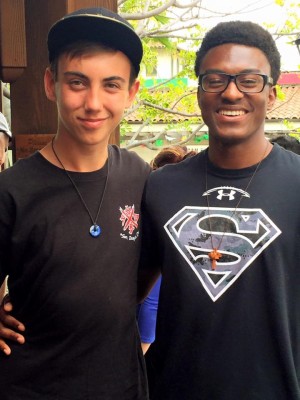 My oldest son, Toby, recently graduated from the eighth grade, and several months ago my wife and I began looking at different high school options. We ended up being interested in St. Augustine, which happens to be the school that Frank IV attended. I reached out to Frank and asked him about any insight that he might have for the school interview. Rather than typing back a few ideas, he asked if he could meet Toby and walk him around campus.   One day Toby and my wife spent an afternoon with Frank IV and his buddy, touring the campus, meeting teachers and administration, and getting a feel for the school. It was a priceless visit, and put Toby at ease with the idea of high school.

Toby went through the application process and was accepted to St. Augustine. We ran into Frank IV at the freshman orientation, and he gave Toby a big hug and congratulated him on his acceptance. Frank IV had made news the week prior by accepting a full scholarship to play football at Stanford, and the attention by the ”Big Man on Campus” made Toby feel like a million bucks.

This is the point where this actually becomes a collecting story. Autographed AFL cards are my passion, and the cornerstone of my collection. One of the things that I cherish about collecting signed cards is the occasions when I receive a letter back from a ballplayer. This bit of interaction makes the collection very personal and a real joy for me.

A couple of months ago, I was notified about an eBay listing for just such a letter that had been written to a fan by Frank Buncom. I took a look at the letter, and was immediately impressed by the content. It spoke of Frank II’s kindness, his interest in his fans, and even mentioned autographing a card in the mail. 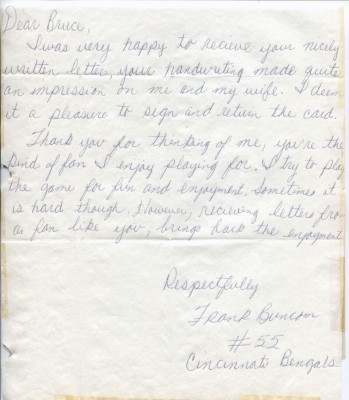 I was able to work out a deal for the letter, and I proudly added it to my autographed card binders, where I keep other such letters that I have received.

I’d briefly thought about how cool it would be to have the autographed card that had accompanied the letter, but had no idea if it still existed, and doubted it would ever surface. Buncom died in 1969. The collection from which the letter had originated had been broken up over the course of several years. The seller of the letter told me that a signed card had not accompanied the letter when he had purchased it. What were the chances of the card ever coming to my attention? It was a lost cause.

Fast forward to mid-July. An autographed 1967 Topps Frank Buncom card popped up on eBay. It had the very high Buy It Now price of $1,219.67. But when I looked a bit more closely at the listing, I was shocked to find that the card had the following inscription, “To Bruce, A True Fan, Frank Buncom #55.” I was absolutely floored, as my letter was addressed “To Bruce,” and referenced Bruce being the kind of fan that Buncom liked playing for. Additionally, there was a tape stain on the card, similar to the ones around the edges of my letter. I was pretty certain that this was the card that belonged to my letter.

I sent the seller an inquiry, mentioning my letter, and wondering if he would like to trade his Buncom for another of mine, as one without the inscription would certainly be easier to sell. He responded with a long note, but the two paragraphs that I found most interesting were: 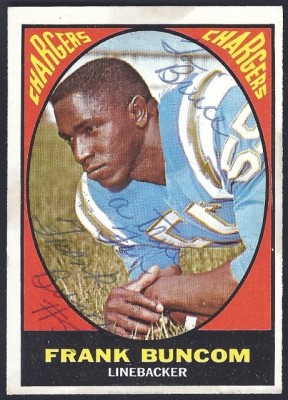 It’s funny that you should mention the letter. I had hesitated a few days after I saw the listing and when I went to purchase it, it had been sold. I contacted the seller asking to pass along my information to the buyer (I never received a notification from the seller) in order to try and purchase the letter and marry the two items back together.

Unfortunately, this gentleman didn’t actually want to sell the card. He told me that he had posted the Buncom on eBay with a “don’t want to sell” price, only hoping to drive attention to his personal want lists, which he had included in the body of the listing.

After emailing back-and-forth for a while, he said that he might consider trading the Buncom for some “non-sports Topps test issues,” which he had recently begun collecting. I don’t know the first thing about that segment of the hobby, so I immediately began researching these types of cards.   I was eventually able to locate a small stack of these test issues in Arizona, and after several more emails we came to an agreeable trade for the Buncom card. 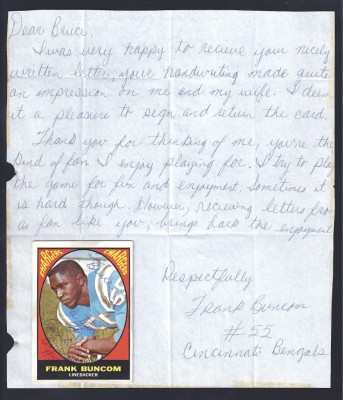 Card and Letter, back together again

Now that this deal is complete and the card and letter are in my hands, I sometimes sit back and wonder how the stars must have aligned for this set of circumstances to occur. First, I developed an interest in a football player who died three years before I was born. Additionally, how odd is it that not only do I have an interest in this player, but I wrote the forward for a book about him, and have become friends with his grandson, who just graduated from the high school that my son now attends? Then I was able to purchase a letter written by this football player who died 46 years ago. Lastly, the very card that once accompanied the letter came up for sale just a few short months later. I’ve learned that Bruce (the collector who originally wrote to Buncom) lived in the Midwest, but his collection was broken up.  The letter came from a dealer in Las Vegas, while the card was shipped out of Florida. Both pieces are now back in San Diego, which is probably where Frank Buncom was when he first answered Bruce’s autograph request so many years ago.  You may call it karma, divine intervention, or simply a healthy dose of crazy cosmic shit, but something interesting must go on for things like this to come about. It’s all very strange, but I just love it.