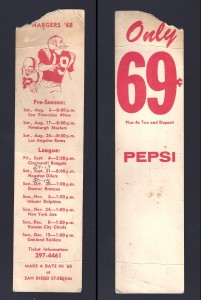 As a collector of Lance Alworth memorabilia, I have seen much of the material that is available to collectors.  As a football player from the 1960s, Alworth has just a handful of trading cards that were produced during his career.  Typically one Topps or Fleer card per season, and in later years, a subset card or two.  The Chargers occasionally produced team issues, and there were the 1962 Union Oil cards and 1968 Corn Flakes Champion cards, but in comparison to modern athletes, Alworth has very little on the market.  In fact, with the recent surge in autographed and memorabilia cards in recent years, it is very likely that Alworth has had more cards produced in the last 10 years than when he was an active player.

Being one of the AFL’s most popular players, Lance Alworth had an opportunity to be a part of the few endorsement deals that were offered to professional football players in the 1960s.  Alworth can be found touting Venture Hair Dressing for Men, Van Heusen clothing, and a couple of other products.  There is very little point-of-sale advertising featuring Alworth, however, so there is not much for collectors to obtain.

It was with all of this in mind last week that I stumbled across a Lance Alworth item that I had not previously seen.  I recently purchased a large collection of memorabilia, and while searching one of the boxes, I found what appears to be an insert into six-packs of Pepsi bottles.  This insert, which measures 9″ tall by 2.25″ wide, appears to have been stuck into the boxed bottle six packs in stores around San Diego.  One side feature screams out “Only 69 cents”, while the other side features a drawing of Lance Alworth looking over his shoulder in preparation of a catch.  It is labeled, “Chargers ’68,” and lists the Chargers 1968 schedule, as well as the ticket office telephone number.  Unfortunately the one that I found is missing a top corner, and is marred by some creasing.  Still, it is an interesting piece, and one that is new to this Lance Alworth memorabilia collector.