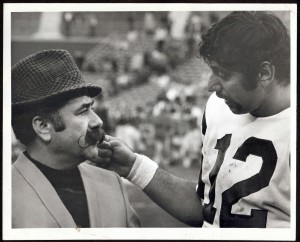 One the greatest characters in San Diego Chargers history is minority owner, George Pernicano, whose association with the Chargers began when they first moved to San Diego, and he was able to purchase a small stake in the team.  Since that time, Pernicano has remained very closely connected to the team, and has attended every Chargers game, home and away, and manages to watch a fair number of practices as well.  Now into his 90’s, Pernicano can still be seen in a private box at Chargers games that he shares with one-time team owner, Barron Hilton.

George Pernicano first came to San Diego from Detroit in the 1940s, and according to him, introduced pizza to San Diego.  He slowly began opening his Pernicano’s pizza restaurants, as well as a classier Italian eatery called Casa di Baffi, which translates into House of the Mustache. Did I mention that Pernicano still has the best handlebar mustache this side of Rollie Fingers, which, for years, he had insured for $50,000 with Lloyd’s of London?

Pernicano became something of a local celebrity because of his gregarious nature, mustache, restaurants and connection to the Chargers, so when the above photo came up on ebay, I knew that I needed to add it to my collection.  Shown above are Pernicano and one of the more famous attendees of the Casa di Baffi, New York Jets legend, Joe Namath, on the sidelines after a game at San Diego Stadium. 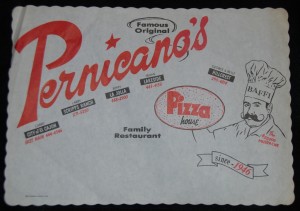