A Sip of Coffee for Bill Wood – by Dave Steidel

A Sip of Coffee for Bill Wood – by Dave Steidel

For those of you who are old enough to remember the TV show The Naked City which ran from 1958 – 1963 you will recall that every show ended with the announcement that “there are 8 million stories in the Naked City, this has been one of them!”

Over the course of the AFL’s decade of existence, according to Ange Coniglio’s remembertheafl.com website, over 1,400 players wore AFL uniforms on game days.  The most notable are those who made it from start to finish, all ten years.  Even more notable are the three: Jim Otto, George Blanda and Gino Cappeletti, who played in all 14 games in every one of those ten seasons, with Otto getting the award for the most plays on the field.  Sprinkled over the years many books, newspapers and magazines wrote about Billy Cannon and the court cases over his contract, Lance Alworth and his Bambi-like leaping ability, Jim Otto as Mr. AFL, Len Dawson and his rise from the depths of the NFL unwanted list to AFL champion, Cookie Gilchrist’s bouts with coaches, Ben Davidson’s off-season motor cycle jaunts and of course, Joe Namath about anything and everything.  But among those 8 million stories in this Naked City, a.k.a the AFL, it is safe to say that there has never been a story written about Bill Wood…     … until now.

While many AFL players had careers that were long and storied, others logged time that was short but sweet.  And then there are those who were able to lay claim to having that infamous cup of coffee, playing professional football for only a short taste of the big time.  For Bill Wood   it wasn’t even a cup, it was more like a sip! What Bill Wood has in common with Jim Otto, George Blanda, Alworth, Namath and the like is that he too played in the AFL.  But what Bill Wood may have to himself is the claim that he may possibly have had the shortest career in the history of the league. A two-way back for West Virginia Wesleyan in the early sixties where until he injured his knee five games into his senior season, Bill was one the team’s stars.  Back then most of the time your rehab started merely with rest rather than an MRI.  So after a few weeks on the shelf Bill tried to return for WVW’s last game of 1962.  He took himself out after two plays when he realized that although he could run pretty fast straight ahead, he could not cut to the left or right. 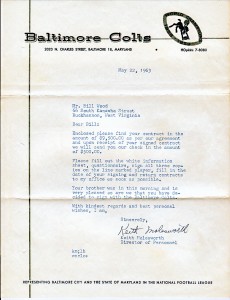 Undrafted in the spring, one of his WVW coaches contacted a coaching friend with the Baltimore Colts and advised them to take a chance and invite Wood to their pre-season camp.  He stayed two weeks before being left go but former Colt head coach Weeb Ewbank’s son-in-law, who was also on the Colts staff, knew Weeb, now coaching the Jets, was looking for speedy defensive backs and gave him a call.  He explained that although the Colts cut Wood, they felt strongly enough about him to recommend him to other teams.  Woody arrived at the Jets Peekskill, NY training camp a few weeks later drawing a check that paid him $250. a week.  Desiring to play wide receiver instead of defense, one day Wood was asked after practice to do a test run to see if the Jets could use him on offense.  Still in full practice gear and after two hours of scrimmaging, Wood ran a 4.5, 40 yard dash.  From that point forward he worked out with the offense.

Ahead of him on the depth chart were Don Maynard, Bake Turner, Dee Mackey, Ken Gregory and Gene Heeter, so throughout 1963, their team’s first year as the Jets, Wood was one of a half dozen players kept around for insurance on the Taxi squad.  He lived in Queens with a couple other teammates and said that no one in the neighborhood knew that any of them were professional football players.

Practices, always held at the Polo Grounds, were very structured under Ewbank although the stadium was still in disrepair while their new home, Shea Stadium, was being built.  Wood and his Taxi mates participated in all practices and meetings and were used exclusively as the “scout team”, running plays that their opponents would run in their next game.  One of his most noted memories during his ’63 campaign is the day in early fall that Tonight Show host Johnny Carson came to Coogan’s Bluff to participate in a Jets practice session, although no one was allowed to hit him.  Wood noted that Carson was given his locker for the day while he was moved to a nail on the wall at the other side of the room. 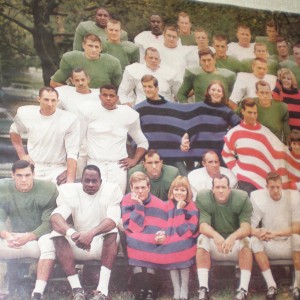 As the season unfolded Wood and a few of his teammates were selected to participate in a LIFE magazine advertisement.  Wood is the first player on the left in the bottom row – to his left three bodies down are Curly Johnson in the green jersey and Larry Grantham, white jersey – on the top row at the far left is tackle Sherman Plunkett.  It is his only photo as a pro.

He traveled with the Jets through the first 13 games of the season but had not yet been placed on an active “game day” roster.  Then came December 22, 1963, the season finale in Kansas City and Bill finally got the nod.  He would be on the active roster and play in the last game of the season.  Wood explained that in his mind it was a “look-see” to determine whether he’d be invited back for the 1964 season. 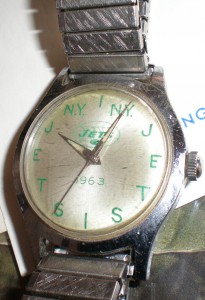 To this day, fifty years later, Woody cannot remember his number for his one and only AFL game, but he does remember that he got in for about five plays with the kicking and punting teams.  He also remembers being in on a couple of tackles, although not the players he helped bring down.  The Chiefs won the game in resounding fashion 48-0!

The Jets finished the season with a 5-8-1 record and celebrated their first year under the new Werblin regime with a team dinner at Toots Shore’s restaurant where everyone was awarded a team watch.  It is the only piece of Jet memorabilia Wood has in his possession. 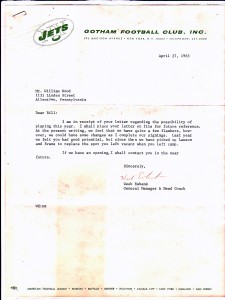 As training camp in 1964 opened Wood reported to Peekskill for his second year.  But he knew immediately that his knee was just not able to respond to the repeated task of cutting in different directions and left camp after the second practice.  He sat out the entire season but requested to report to the Jets again in 1965.  But by then the Jets were heading in a new direction.  The arrival of Joe Namath, John Huarte and George Sauer Jr., the signing of back-ups Jim Evans and Al Lawson and the continued emergence of Don Maynard, Bake Turner and Matt Snell as a receiving trio left little room for Wood to return.  Never bitter about how things turned out, Bill is thankful that the Jets even responded to his request.  In the end, Bill Wood’s career as a professional football player was over after five plays in one game, perhaps the shortest of all 1,400 players who played in the AFL.

Now 73 years old, Bill Wood is a retired school teacher who spends his time traveling with his wife between their two homes in Allentown, Pa and Avalon, NJ.  He still has fond memories about his playing days and while he played only a handful of plays in only one game for the AFL in 1963 he was able to do what most American males can only dream about, he played professional football!  It may have been only a sip from the cup of coffee – but among those 8 million stories in the Naked City (the AFL) – Bill Wood is one of them.