A Tactical Move That Backfired

A Tactical Move That Backfired

Guest blogger, Buzz Ponce, is in the process of writing what will certainly be a book of great interest for fans of the American Football League.  Finding Frank: Full Circle in a Life Cut Short is about the too-short life of Chargers and Bengals linebacker, Frank Buncom.  Ponce graciously provides excerpts of his upcoming work for our enjoyment.

In circumstances mostly beyond his control, Frank Buncom’s life jumped and swerved in a dramatically different direction in early 1968.

The American Football League expanded by one team: the Cincinnati Bengals. In what was called the “allocation draft” which was put in place by the league to jump start the team roster and acquire players, the Bengals were awarded a total of 40 veteran players from the other nine teams in the AFL, with each squad designating up to six players.

Buncom did not know for sure what his future with the Chargers would foretell at the beginning of that year. But as early spring approached, he began to suspect that coach and general manager Sid Gillman would very well place his name on the expansion draft list, severing his ties with the San Diego team.

And as he expected, that’s what occurred, in large part due to the fact that Buncom played the entire 1967 season without a contract. In an attempt to leverage for more money and in a strategic move not often seen from a player at that time, he was hopeful that by playing out his obligation with the team in ’67 and becoming a free agent, he’d be in a position to increase his salary the next year – and remain a San Diego Charger where he had established, he thought, deep roots not just with the team but with the city as well.

It was a tactical move that backfired. Not at all surprisingly, Gillman did what he was well-known for as a General Manager – he dropped all sentiment and played the egregious role of the cold-hearted decision maker; Buncom found his name on the allocation draft list, designated for Cincinnati.

And in what was the lowest point of Buncom’s professional football career, he wasn’t happy about the situation. He didn’t want to go; he strongly preferred to remain in Southern California and San Diego where he called home, his wife taught school, and where they would start a family.

In a column for the San Diego Union that spring, the veteran football writer Jerry Magee reported, “At  first, when he was claimed by Cincinnati, Buncom was said to have confided to associates that he did not desire to represent the Bengals under any conditions. Frank is a native Californian, still a San Diego resident and a good enough linebacker to have appeared in the AFL’s last All Star game; life on the banks of the Ohio River has no appeal to him.”

Magee went on to add, “Now he seems to be teetering. ‘I’m still talking,’ Buncom said of his dealings with Brown (owner and coach Paul Brown). ‘I don’t want to make any comment. We’ll see what happens.’” [1]

Buncom’s unsigned contract in 1967 was a microcosm of player labor relations with team management in the late 1960’s in both the AFL and NFL. It was a very risky move on his part to alienate the always prickly Gillman and jeopardized his playing days not just with the Chargers, but possibly throughout all of professional football.

As Magee summarized in his column, “Football, it seems, isn’t in any hurry to sign athletes who desire to go elsewhere. Some people are whispering around the word ‘conspiracy,’ implying that the pro clubs have reached a quiet agreement not to touch players who are waiting out their options.

“This, of course, would be illegal. It also would be awfully difficult to prove. Being a free agent no longer seems like such an attractive status, as Buncom must be aware.”

His unsigned contract angered Gillman and the Chargers, who back in the days before collective bargaining held all the negotiating power, to the point of the team seemingly happily relinquishing their three-time AFL All Star and their starting right linebacker for six years to a rival team in their own division. 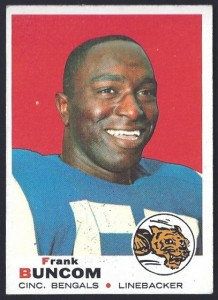 Buncom eventually came to terms with the Bengals in the late spring and reported to their training camp in July at Wilmington College in Ohio.

Cincinnati head coach and owner Paul Brown remembered his frustration in the Bengal early days in his autobiography. “The AFL player’s allocation draft held in Jacksonville, Florida, was also mismanaged and poorly run. We were given the names of the eligible players only days before, and I had an inkling of what we were up against when I saw the list arriving on scraps of paper, the backs of envelopes—anything that was at hand. We were supposed to have been provided with vital statistics, including injuries, and all pertinent information about every player, but they were often missing, and some names were even wrong. The list included every cripple, bad actor, retiree or inept player in the AFL. Several of the players had already told their teams they were going to retire, and more than a dozen of forty players we eventually picked never even showed up for training camp the following summer.

“Only seventeen players from that group made our first team, and some, such as Ernie Wright, Sherrill Headrick, Frank Buncom, Bobby, Hunt Andy Rice and Fletcher Smith, showed some of the quality we had hoped to extract from the draft…” [2]

In an article from the United Press International in April, it was written that, “Cincinnati’s AFL rivals are not particularly generous. The owners made sure that Paul Brown doesn’t start another dynasty too soon (referring to Brown’s success with the Cleveland Browns in the All-American Football Conference and then the NFL). Nevertheless, Brown selected several older veterans who still have a few good years left—tackle Ernie Wright, linebackers Sherrill Headrick, and Frank Buncom, and defensive back Bobby Hunt—and several talented, but relatively untested youngsters.”[3]

Writing in the blog, “Tales From the American Football League,” former Oakland Raider and Cincinnati Bengal Rod Sherman remembered the very early years with Cincinnati. “Paul Brown was not only the coach, but he was the general manager, he was the president, and he was one of the owners of the Cincinnati Bengals. I challenged people when the Bengal organization was 10-15 years old, to name a Bengals player that had become a superstar. The closest one that had that kind of potential was a homegrown quarterback by the name of Greg Cook. But he injured his shoulder, and I don’t know that he ever made a comeback. He could have been charted to be a superstar. This might be a biased statement, but then I think you have to go to a fellow USC Trojan, Anthony Munoz, to find a legitimate superstar with the Bengals.”[4]

With his All Star past and veteran status Buncom quickly became a team leader in 1968, starting all 14 games. But as with nearly all expansion teams, the Bengals struggled mightily in their first year, in spite of getting out of the gate quickly. They upset the Denver Broncos, 24–10 and the Buffalo Bills, 34–23 in their first two regular-season home games, leading to a short-lived sense of false hope for the franchise.

They collapsed hurriedly after their surprising start and finished the year with a paltry, yet not unexpected, 3-11 record, last in the AFL’s Western Division. Running back Paul Robinson led the AFL in rushing with 1023 yards and was named Rookie of the Year, boding better things for the future.

But not for Buncom.  Following his initial season with Cincinnati, he looked forward to his next year with the team. But it would be short and disastrous, ending in tragedy before the first game with his sudden death from a pulmonary embolism.

Following the 1968 season, after just one year, Frank Buncom’s past connection with the San Diego Chargers was now very old news and consigned to the back pages of professional football chronicles.