A Visit with Jerry Magee

A Visit with Jerry Magee 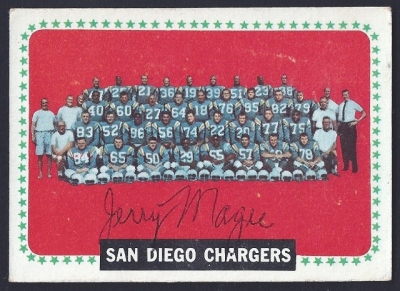 This week I had an opportunity to meet with one of the AFL’s great supporters, former San Diego Union beat reporter, Jerry Magee.  An excellent writer who covered boxing, tennis and minor league baseball, began covering the Chargers when the team moved to San Diego in 1961, and kept the beat for more than 30 years.

During his tenure, Jerry Magee became one of the AFL’s most vocal supporters, not only as a writer, but later as a Pro Football Hall of Fame voter and member of the PFHOF Veteran’s Committee.  Magee is now retired, but still follows football actively, from his office decorated with books and photos gathered throughout his career.

While researching my book on the 1960s Chargers, some 11 years ago, I interviewed Jerry Magee about his time covering the AFL squad.  The full interview can be found HERE.