In conjunction with the AFL’s 50th anniversary season in 2009, the Highland Mint was contracted to design and mint coins commemorating each of the original eight AFL teams.  One side featured the AFL 50th anniversary logo, while the other side recognized an individual team.  Three coins were made to represent each team, one of .999 fine silver, one in gold-overlay and another in silver-overlay.  The .999 silver coins were limited to 50 of each team, while 5,000 of each team were made in the other formats.

Each team received one complete set of coins tastefully presented in a frame, along with just a handful of the individual .999 silver coins representing their own team. 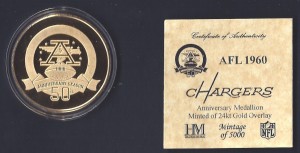