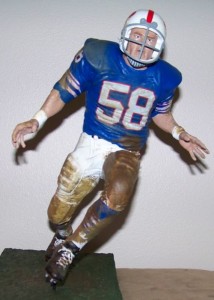 One of the things that I like to do with this site is to feature the many different and creative ways that AFL fans celebrate and recognize the old league.  We have talked to several collectors, historians, and a photograph restorer, but I believe this is the first time that we are connecting with an AFL-related artist.

Ian Elrod first drew reader interest when he mentioned that he makes custom AFL figurines in the comments section of a post about Mark Palczewski, a Bills and Chargers fan who restores old photographic negatives of AFL players.  I received several emails about Elrod’s work, and so I asked him to put together a short piece about the process.  He responded with the following article and images.  Those that wish to contact Ian about purchasing some of his work can email him at icelrod@yahoo.com.  Todd Tobias and Tales from the American Football League are in no way involved in any such transaction, and do not profit from nor guarantee any transaction. 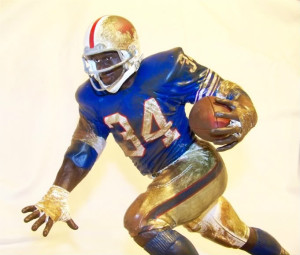 I have always been a football fan, but did not have a favorite team until 1998. That season I started to root for the Buffalo Bills. I am a huge history buff so I read about the great teams that the Bills had. I remembered seeing many of those teams play, but not the teams from the 1960s. I was unaware of the AFL or that the Bills were Champions of the league in 64 and 65, until I did the research. From then on I have been hooked on the AFL and the 1964 Buffalo Bills. 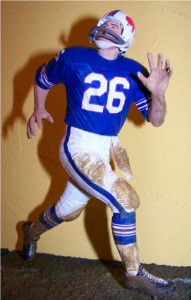 I also have another great love besides football and that is art. I have always enjoyed painting and sculpting. After reading a magazine article on customizing figures, I knew I had found a way to combine my two loves. I made my first AFL custom of Billy Shaw making a 12″ figure of him. Since then I have made many figures of great AFL Bills. I have made Mike Stratton, Booker Edgerson, Butch Byrd, George Saimes, and many more Blly Shaw’s just to name a few. I absolutely love the fact that I can make these figures as tributes to these great players of the greatest league ever. There is no other league, there is only one. That is the AFL. 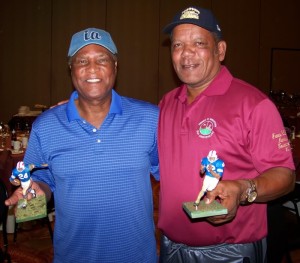