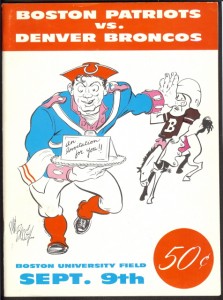 This past week we have been designing Mt. Rushmore-type monuments for the original eight AFL franchises. So far we have tackled the Buffalo Bills & Dallas Texans/Kansas City Chiefs, and the Los Angeles/San Diego Chargers & Houston Oilers.  All four franchises were at the top of the AFL food chain at points during the decade, and accordingly have had many individuals who could legitimately vie for space among the top four positions in respective AFL team histories.  Today is a bit of a different case, as neither the Boston Patriots nor the Denver Broncos ever wore AFL crowns, yet both franchises had members that were important not only to their teams, but to the AFL as a whole.

So let’s continue this process today with the Boston Patriots and Denver Broncos.  Below are some names for you to think about while constructing your lists, and as always, you are certainly welcome to add names that I have not provided.  Again, I ask only that the people on your lists were in some way involved with their teams during the 1960s.  As great as Karl Mecklenburg was, he doesn’t belong on the Broncos AFL Mt. Rushmore.