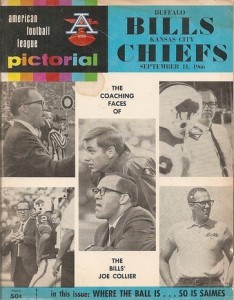 A post two days ago about the candidates for an Mt. Rushmore-type monument for the AFL generated some great discussion.  In the midst of the comments, former Dallas Texans and Kansas City Chiefs receiver, Chris Burford, noted that such an honor should be bestowed upon each team.  With so many players, coaches, owners and other important dignitaries associated with the AFL, it could prove a challenge to narrow down to four representatives for each team, let alone the entire league.  However, in the spirit of great discussion, that is what I would like to do.  Over the next four days, I will put forward two teams each day, along with a list of potential candidates for each.  I would like to see you the readers of Tales from the American Football League put together your own Mt. Rushmores.  I ask only that the people on your lists were in some way involved with their teams during the 1960s.  As great as Dan Fouts was, he doesn’t belong on the Chargers AFL Mt. Rushmore.

To begin this process, let’s start with the Buffalo Bills and Kansas City Chiefs.  Both franchises won multiple AFL championships, and had their share of important figures.  Here are some names for you to think about while constructing your lists, though you are certainly welcome to add names that I have not provided.