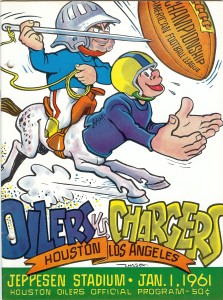 Yesterday we put together our Mt. Rushmore monuments for the Buffalo Bills and Kansas City Chiefs, two stories franchises of the old AFL.  There were a lot of great lists put together, and probably, a bit of frustration with the process because narrowing a list down to just four names can be next to impossible!

Let’s continue this process today with the San Diego Chargers and Houston Oilers.  Both franchises won were in contention for several AFL championships, and had their share of important figures.  Here are some names for you to think about while constructing your lists, and you are certainly welcome to add names that I have not provided.  Again, I ask only that the people on your lists were in some way involved with their teams during the 1960s.  As great as Earl Campbell was, he doesn’t belong on the Oilers AFL Mt. Rushmore.