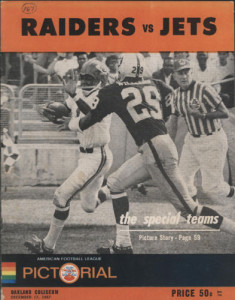 We wrapped up last week by designing Mt. Rushmore-type monuments for six of the original eight AFL franchises. So far we have tackled the Buffalo Bills & Dallas Texans/Kansas City Chiefs, the Los Angeles/San Diego Chargers & Houston Oilers, and the Boston Patriots & Denver Broncos.  All have had their share of fantastic and important AFL individuals.  The teams that we are working up with today are no different.

So let’s continue this process today with the New York Titans/Jets and Oakland Raiders.  Below are some names for you to think about while constructing your lists, and as always, you are certainly welcome to add names that I have not provided.  Again, I ask only that the people on your lists were in some way involved with their teams during the 1960s.  As great as Lester Hayes was, he doesn’t belong on the Raiders AFL Mt. Rushmore.