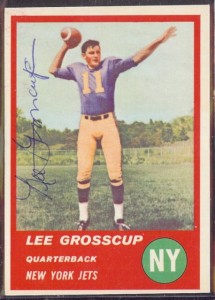 Drafted by the New York Giants in 1959 Lee Grosscup, an NEA All-American quarterback out of the University of Utah, had an uphill battle to break into the lineup of one of the NFL’s premier team.  From 1956 through 1961 the Giants played in four championship games with established quarterbacks Charlie Conerly, George Shaw and Y.A. Tittle at the helm.  While Grosscup was learning the system he saw action sparingly and threw only 47 passes in 8 games over his first two seasons.  Under coach Allie Sherman, Grosscup was used mainly as the third string option and was on the headset to the coaching staff in the booth on most Sundays.

With Conerly’s retirement after the ’61 season Grosscup appeared to be on the verge of moving into Y.A.’s backup role.  But when the Giants traded for St. Louis’ Ralph Gugliemi, Grosscup was rightfully concerned.  On July 31, 1962 the third year thrower was informed that he was put on 48 hour waivers with his rights going first to Washington and then Minnesota if they were to be interested.  The Vikings were and Grosscup was off to the Northlands where he would be led by coach Norm Van Brocklin.  In their first year in the league the Vikings relied on rookie scrambler Fran Tarkenton at quarterback, with occasional breathers supplied by back up George Shaw.   But Grosscup’s stay in Minnesota short-lived, ending before the regular season started and on September 7, after a few phone calls to the New York Titans and Harry Wismer’s ‘okay’ to sign him, Grosscup agreed to a contract with the AFL team that was looking to rise above two straight 7-7 seasons.

He caught up with the Titans in Oakland on Friday, September 7 as they prepared for their season opener against the Raiders that Sunday in the first home game in Oakland’s new Frank Youell Field.  Suiting up for his third team in a month, Grosscup found himself cramming as if he had just heard he was having a final exam the next day.  Spending as much extra time as he could muster with receivers Don Maynard and Art Powell after practice he was encouraged that the Titans system combined schemes he was already acquainted with from his time with the Giants and short stay in Minnesota.

Titans coach Bulldog Turner was not planning on using Grosscup in their first game but after seeing him throw in his two practice sessions, he decided to let him dress and use him for a set or two of downs to get his feet wet.  Wearing #17 Grosscup watched from the sidelines as Titan starter Butch Songin was ineffective in the first quarter, throwing 2 interceptions.  As the second quarter started Turner turned to Grosscup and told him to be ready for the next set of downs.  The night before the season’s kick-off, Lee had decided that if he got into the game he would go long on his first play.  And when the Raiders missed a field goal attempt, putting the ball on the Titans own 20 yard line, he called the play he had been planning for nearly 15 hours: “West Ray over, 51 X up, Y hook in front of the safety, on a quick count”.  Easy enough to call even though he had only a limited Titan vocabulary on his third day as a Titan.  The play called for split end Powell to run straight and fast as far as he could go.  The wind was blowing in his face but that did not deter Grosscup from letting it go.  As Powell ran past Oakland’s Bob Garner, Grosscup went airborne, but the ball was a little behind the streaking Powell.  Making the adjustment, Powell came back and out-jumped Garner to make the catch, broke Garner’s tackle attempt and ran into the end zone for an 80 yard touchdown.  Grosscup had hit a home run on his first AFL pass!  Not a bad beginning for his new team, and Grosscup had hoped that the play was seen by some of his New York fans as the game was being broadcast nationally on ABC.

When the Titans offense was beckoned back on the field moments later after an interception, Grosscup had a first and ten from the Oakland 19 yard line.  This time he called a “Titan pass right variation” and rolled to his left after taking the snap from center.  Spotting halfback Dick Christy at the 9 yard line he hit him on the sideline where Christy took it in for another score.  Two plays, two passes, two touchdowns.  The half ended with the Titans ahead.

After halftime Songin was given the nod to begin the second half.  But Grosscup returned to the game when the Raiders narrowed the score to 21-17, midway through the third quarter.  Again Grosscup teamed up with Art Powell for touchdown, this time for 64 yards.  The Titans went on to win their first game of 1962 over the Raiders 28-17 with Grosscup throwing three touchdown passes, one for each day he had been a Titan.

His second game was not as pretty as the ‘welcome to the AFL committee’ of Earl Faison, Bill Hudson, Ron Nery and Ernie Ladd greeted him in San Diego.  Completing 20 of 41 passes for two touchdowns and three interceptions the Titans lost 40-14.

On the season’s third week the Titans, now back on the east coast, tried to rebound from their San Diego beat-down as they prepared for their third away game in a row in Buffalo when Grosscup was introduced to the wild and whimsical ways of Harry Wismer.  The subject, as with most Wismer encounters, was money.  Before signing on with the Titans, Grosscup had negotiated to be paid the same salary he had with the Giants.  Wismer agreed, but he had agreed to pay the rest of his players their salaries as well.  The pay checks for those salaries, including Grosscup’s, were now in question.  When Wismer showed up to the team practice on September 18 at NYU, all eyes were on him as he spoke with general manager George Sauer, hoping he would be handed the payroll.  As Wismer retreated from the complex, no checks were left behind.  Those Titans who had been around for more than a year had seen this before.  Wismer continued to break the league’s rule that called for players to be paid with 24 hours after the game.  Fed-up with his habit of payroll negligence the team leaders called a player meeting after practice to call a strike if Wismer did not meet his responsibility to each player by noon the next day.  The deadline came and went without compliance, and the Titan players had no recourse but the refuse to practice, although they did conduct a walk-through of their own.  It had now been two weeks since Grosscup had become a Titan and had gone from being a homerun hero in Oakland, to being welcomed to the AFL by San Diego’s fearsome foursome, to now being on strike.  Quite a change from his experience across the Harlem River.

The following Saturday in Buffalo Grosscup completed 17 of 26 passes and a touchdown, leading to a 17-6 victory.  After three games Grosscup had surged to the top of the charts both in New York and the AFL, ranking second in passing by completing 42 of 75 passes with 6 touchdowns.

With a 2-1 record and Grosscup as the firm starter, the Titans hosted Denver in their first home game of the season.  On the third play from scrimmage Grosscup called for Art Powell to cut to the sideline for a pass.  Seeing that he was double-teamed, Lee tucked the ball away and charged through the pocket up the middle where two linebackers met him from each side, separating him from his helmet and tearing up his already fragile knee.  His day was over!

That evening Wismer called Grosscup and told him he was going to sue the Broncos organization on charges of ‘going after’ the quarterback to get him out of the game.  Add ‘law suit’ to his growing list of bizarre AFL experiences during his first month in the league.

Grosscup played the next two games, losses to Boston and Houston, and then injured his knee again, forcing him to sit out the last two weeks of October and all of November.  He returned to throw only four passes against Buffalo on December 8 and went 4 for 20 in the season’s last game against the Oilers, both losses.  His numbers on the year showed him throwing 126 passes, completing 57 (45.2%) for 855 yards, 8 touchdowns and 8 interceptions, placing 10th in the league in passing.

Grosscup had high hopes to be the team leading as the 1963 training camp opened, but on the last day of the pre-season the Titans decided to go in another direction, making Grosscup its last cut.  Heading north again, Lee signed on with the Saskatchewan Roughriders of the CFL.  In 1964, his last attempt at American football had him briefly in the 49ers camp before he signed on with the Raiders as a taxi squad quarterback.  In 1965 Grosscup quarterbacked for the Hartford Charter Oaks of the new Continental Football League.

Although his playing days were short and relatively uneventful, Lee Grosscup was not to be denied his place in the football archives.  He is often referred to as the inventor of the shovel pass, which he used at Utah, and his life after football brought him many more successes.  His book, Fourth and One, in 1963 chronicled his days with the Giants and Titans and was one of the first inside the locker room books of its kind.  In 1967 he was behind the microphone broadcasting AFL games for NBC before moving to a twenty year career with ABC as a college football analyst.  He also announced USFL games for ABC and until 2003 broadcast games for the University of California.  He also wrote several articles for Sport magazine over the years.

A man of many talents, Lee Grosscup seemed to rise above any obstacle that confronted him and found a way to make his mark the football world.