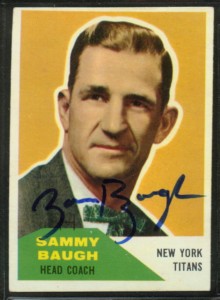 More AFL trivia from our friend, Dave Steidel.  Dave sent over the 500 trivia questions that are included in the print version of his book, Remember the AFL.  Steidel says that the trivia section is not included in the ebook version of his work, so this site will be the one place that you will e able to find the questions online.  Who can answer all of these questions (without looking them up!!)?

Can you name the first group of AFL coaches described below?

1.  I coached the L.A. Rams in the NFL for five years but was fired after the 1959 season.  I coached in more AFL championship games than any other coach.

2.  I was the only coach to be the head man for three of the original AFL teams and won two AFL titles.  My Western Illinois team was undefeated in 1959.

5.  I had a pretty good run as head coach at the Naval Academy for eight years before coming to the AFL. Unfortunately I was the first AFL head coach to be fired.

6. I was the only coach my AFL franchise had throughout the 10 AFL years and my teams played in three AFL championship games and two Super Bowls.

8. My eccentric owner at times was a better slinger than I was.  After refusing to be demoted to assistant coach I was fired and later surfaced as head coach of another AFL team.

9. MATCH THE FIRST PLAYERS DRAFTED INTO THE AFL WITH THE TEAM THAT DRAFTED THEM    (extra credit if you can also match the college these players played for)