Did you know that the Chargers first superstar, Lance Alworth, was actually drafted by the Oakland Raiders?  Raiders’ owner, Al Davis, who at that time was an offensive coach with the Chargers, explains the situation behind signing Alworth in an interview that I did with him for my book, Charging Though the AFL.
We had drafted Lance (Alworth) in a prior draft that was ruled not legal.  So that draft was thrown out.  In the second draft that year, the Oakland Raiders had drafted him, number two, I think, in their draft.  Because they were much lower than us in the draft, they had the rights to him.  But we traded Bo Roberson and several players for Lance because I thought Lance would be a brilliant athlete and a brilliant performer.
It was unique that it was in November, and we had a bye week.  The Chargers did.  We were in San Diego, and I was going to go down to see Lance on that bye week.  I was going down to Arkansas to see him.  I got a call in the middle of the night, and I thought it was the planes calling to say that the weather had changed and they couldn’t go out.  But it was a call that was probably the worst call I have ever had in my life; that my father had died.  So I went to the funeral back East, and then late in the week I went down to see Lance and met him for the first time.  I started to sell him on the Chargers, a young team, a young city, a young league, grow with it, and then of course the point that I would be coaching him.  I had the ability to sell the great Sid Gillman, and of course the owner of the team, Barron Hilton. 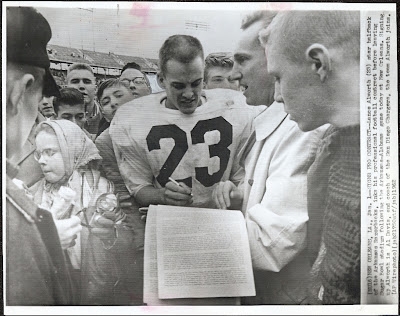