Alex Kroll Writes about his days as a New York Titan

Alex Kroll Writes about his days as a New York Titan 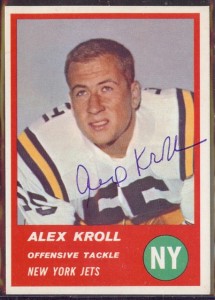 In these days of multi-million dollar player contracts and multi-billion dollar television deals, it is easy to overlook the fact that many professional football franchises had very humble beginnings.  While Lamar Hunt, Barron Hilton and Bud Adams had seemingly limitless wealth, and their teams did not suffer from lack of finances, other teams were not nearly as fortunate.  The Oakland Raiders, Denver Broncos and Boston Patriots were all on shaky financial ground in the beginning, but before the New York Jets shocked the nation by defeating the Baltimore Colts in Super Bowl III, they went by the name of “Titans,” and gave new meaning to the phrase “financial difficulty.”

Alex Kroll was a highly decorated college football player as a senior in 1961.  After his graduation from Rutgers University in the Summer of 1962, Kroll went to training camp with the New York Titans, who had drafted him in the second round of the AFL Draft.  Unfortunately for Kroll, he joined the Titans in what was to be their final season.  A number of factors contributed to the Titans’ demise, including the outlandish “leadership” of owner Harry Wismer, and his frequently empty bank account.  Having a stable franchise in New York, the media capital of the world, was seen as a must by all involved with the AFL, so the league eventually stepped in and took over management of the moribund franchise just before it completely imploded.

Alex Kroll played just one season before leaving professional football and becoming a highly successful executive with the Young & Rubicam Advertising Agency.  But in 1969, several months after the New York Jets were victorious in that famous Super Bowl game, Kroll recorded his New York Titans memories in a fantastic article for Sports Illustrated, called The Last of the Titans.  As much as anything else I have ever read, this article describes the circus-like atmosphere that surrounded the Titans, and the many “off the field” issues that these players had to endure to continue participating in the sport that they loved.  This article is well-worth your time, and should provide you with more than a few  good laughs.  Enjoy!